Signing a Letter of Understanding: A ‘Real’ Step Toward Reconciliation 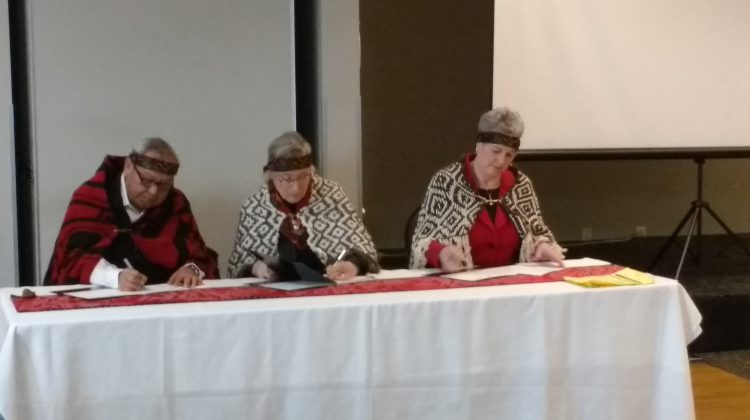 A ‘real’ step toward reconciliation was taken at the Ramada Inn Duncan, as the federal, provincial, and Cowichan Tribes governments signed a Letter of Understanding (LOU).

The LOU aims to support the development of a framework and process for Cowichan Tribes to use its own jurisdiction over child and family services of its members.

Tribes Chief William Seymour said Indigenous children have been taken off reserve land for too long and this Letter of Understanding is one major step toward reconciliation.

“The work that is going to be based on our history, our tradition, and our culture so that our children aren’t going off the reserve and staying with family,” said Seymour.

Carolyn Bennett, the federal Minister of Crown-Indigenous Relations said poverty, mental health, housing, and other issues have led to the ‘disaster’ that is so many Indigenous children and youth being taken from their families.

“We have to get away from this industry that was the child welfare registry, where the money was going to lawyers to apprehend children and agencies and non-Indigenous foster families, instead of to kids, and families, and communities and aunties and grandparents that would traditionally look after the children when mom needed some help,” said Bennett.

Seymour said now, the government will work with families in finding solutions, instead of the way its been for a long time, where the kids are removed from their homes, then the cases are investigated.

“There are so many incidents about why they are removed. Today the policy for the ministry is identical, they go right there, they remove the children, and then they investigate,” said Seymour. “We’ve been working on getting prevention dollars. Prevention dollars means that they don’t have to remove the kids from the home.

“The nation wants to keep their children within their nation; with their families if they can’t be with Mom and Dad, with their elders, grannies, aunties, but also learning their culture, not leaving the community,” said Conroy. ”