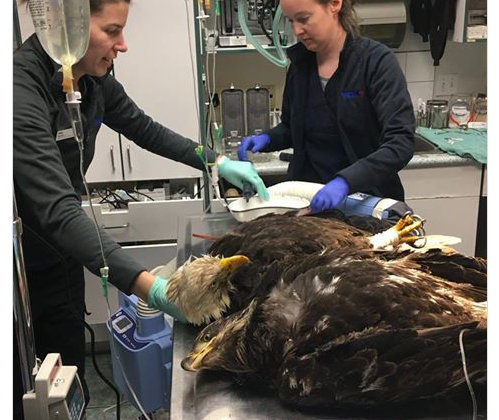 The Raptors Rescue Society and the North Island Wildlife Recovery Centre near Parksville are both treating eagles who were poisoned last month.

It’s believed that the birds fed off the carcass of a farm animal, leading to the poisoning and subsequent deaths of half a dozen eagles.

The Raptor Rescue Society confirmed that a seventh bird died at the North Island Recovery Centre recently and General Manager at the Raptors Robyn Radcliffe said getting the animals to eat has been a struggle.

“We are getting them eating now, but it has been a challenge,” said Radcliffe. “We’re not sure if that’s secondary to the poisoning, what that caused, or what happened, but they need more time. We need to make sure that they’re eating really well and they’re healthy.”

Radcliffe said, “The one that’s with us had some inflammation in its wrist as well which we expect happened when we suspect he fell out of the tree when the poisoning took effect.”

Radcliffe said it’s heartbreaking that seven birds died, but this may serve as an opportunity to create public awareness.

“Did it give us an opportunity to spread the information to more people that this is a concern? Maybe a few more people know about it, maybe that’s a good thing,” said Radcliffe. “It was pretty devastating so we can only try and see the positive in it, in that we were given an opportunity to reach more people, that people understand that it’s really important to consider what we’re putting into the environment.”

The BC Conservation Officer Service continues to investigate.