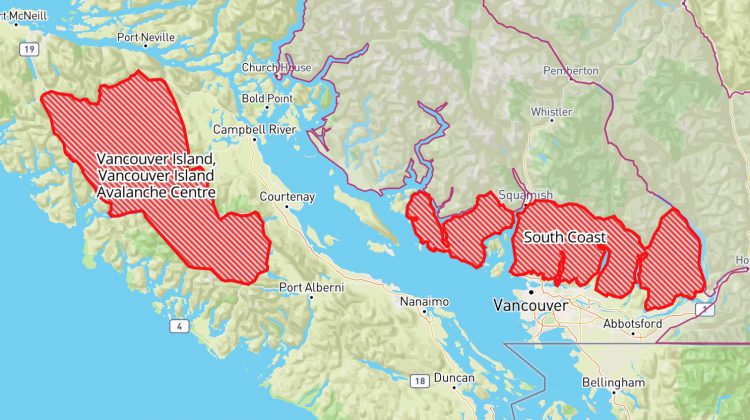 A map of the warning area.

VANCOUVER ISLAND, B.C- There is a risk of avalanches in the backcountry this weekend.

According to a special notice from Avalanche Canada, there is a warning in effect from now until Sunday for British Columbia’s South Coast and Vancouver Island.

“At issue is a weak layer in the snowpack that is currently buried about 50 cm deep,” read the warning.

“The next storm forecast for Friday is expected to bring another 10 – 15 cm of snow, before clearing for the weekend. The weak layer will remain fairly easy to trigger and with the added snow on top, the resulting avalanches could be deadly.”

According to James Floyer, the warning program supervisor for Avalanche Canada, the snow isn’t expected to stabilize after the storm. Floyer said that was unusual for the coastal mountains.

“Human-triggered avalanches will be likely over the weekend, especially on steeper terrain,” said Floyer.

“The clearing skies and fresh snow will be very inviting but we are urging backcountry users to be extra cautious during this period.”

Tests were conducted on February 20th during the investigation into the recent avalanche on Runner Peak. Videos of those tests can be seen here:

All backcountry users in the warning regions should use safe travel techniques and avoid avalanche terrain.

“Everyone in a backcountry party needs the essential rescue gear—transceiver, probe and shovel—and know how to use it,” read the notice.

Current avalanche conditions can be seen at www.avalanche.ca.