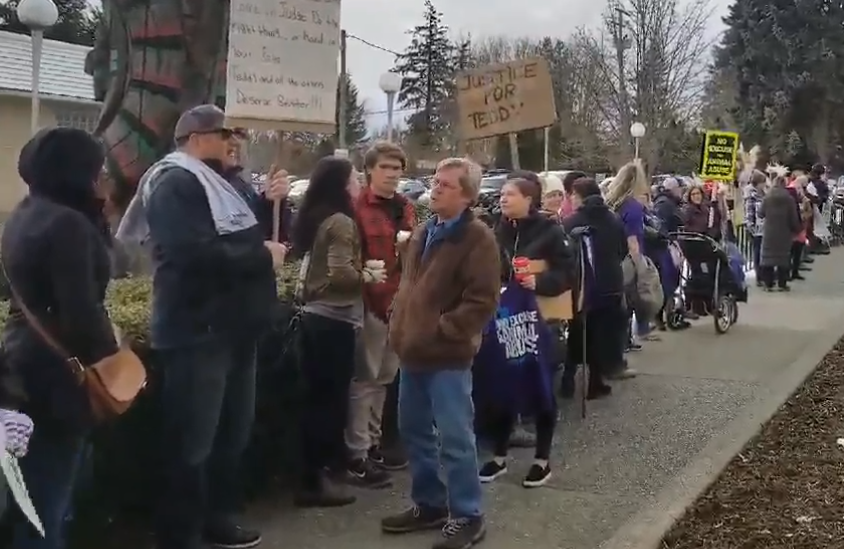 There were tears shed in the courtroom today (Wed) when two veterinarians took the stand to describe the condition a dog was in before it died.

They were testifying in the trial of Anderson Joe and Melissa Tooshley who were charged after the mixed breed dog, dubbed Teddy, was found a year ago tethered in their yard in Duncan.

He was starving and his collar was embedded into his neck causing his head to be three times its normal size.

He died two days after he was seized.

The BC SPCA called the case one of the most profoundly shocking and disturbing cases of abuse they had ever seen.

Anderson Joe is facing the same charges as well as causing unnecessary pain and suffering to an animal.

He has pled not guilty.

As for sentencing for Tooshley, the judge in the case has ordered a pre-sentence report and a Gladue report to assist the court in Tooshley’s sentencing.

It’s expected those will take two months to prepare.

Gladue Reports inform the judge about the personal circumstances of the offender and, in theory, every criminal court in Canada is required to consider Gladue rights when sentencing an offender who self-identifies as an Indigenous person.

Joe and Tooshley could face up to five years in prison and could receive a 10,000 dollar fine and lifetime ban on owning animals if convicted