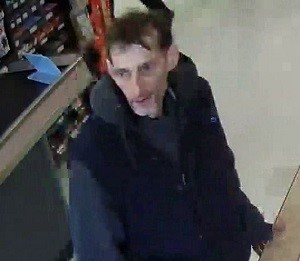 The Nanaimo RCMP is asking for the public’s help in identifying a man who is believed to be responsible for a purse snatching and two fraudulent credit card transactions.

Mounties say a week ago a woman reported an unknown man snatched her purse as she was walking through the Costco parking lot in Nanaimo.

She did call police but they were unable to locate the suspect.

Before she could cancel her credit cards they were used at Quality Foods and the North Ridge General Store on Turner Road.

The suspect seen in the video footage from Quality Foods matches the description of the man who allegedly stole the purse.

The suspect is described as a white man, about 6 feet tall, with a thin build, scruffy with a salt and pepper beard and wearing a dark coloured wind breaker and blue jeans.

If you have information on the identity of this person, contact the Nanaimo RCMP at 250-754-2345. If you wish to remain anonymous, contact Crime Stoppers at www.nanaimocrimestoppers.com or call 1-800-222-8477.