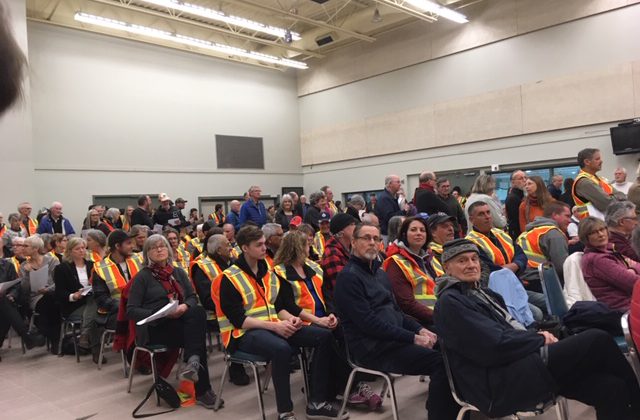 The Cowichan Valley Regional District Board has their work cut out for them following a public hearing on the rezoning application for Tidal Harmony Holdings/Western Stevedoring in Cowichan Bay.

More than 300 people turned out for a public hearing on the issue with about half representing each side of the argument.

It had to be held at the Island Savings Centre to accommodate the crowd, some of whom had to wait in the hallway until there was some space available for them in the room.

The people supporting the application wore orange vests as a show of solidarity for the jobs that are on the line.

Police were also on hand should their services be required but it didn’t come to that.

Sharon Horsburgh of Bayshore Planning Services helped put together the application for the rezoning.

“This is a realignment of the existing use to allow them (PIM) to continue in the Bay doing what they are doing which is building docks and bridges. They need the deep sea port to ship their product.”

The province has already signed off on the marine industrial activities in the Bay.

Jock Hildebrand, a board member with the Cowichan Estuary Restoration and Conservation Association was one of the dozens that spoke against the rezoning.

“It is Shawnigan Lake all over again. Am I worried about people’s jobs, of course, I am, nobody wants to see people unemployed. But there are other places, there are three other industries in the Valley doing precisely the same thing in industrial parks.”

Many of those who spoke against the application wanted an independent environmental assessment done.

Hildebrand said that would go a long way to address residents concerns but Horsburgh says Western Stevedoring has been doing environmental assessments as required and will continue to work with the province and CVRD to address any compliance issues.

Dave Dunbar is the Chief Financial Officer with Western Stevedoring and says, “We are in it for the long haul, we hold valid leases and until 2039 there will be marine industrial activity occurring on that site that is allowed under the Cowichan Estuary Management Plan and has been in the official community plan since 2013.”

The CVRD Board is expected to make a decision on the issue in early April.