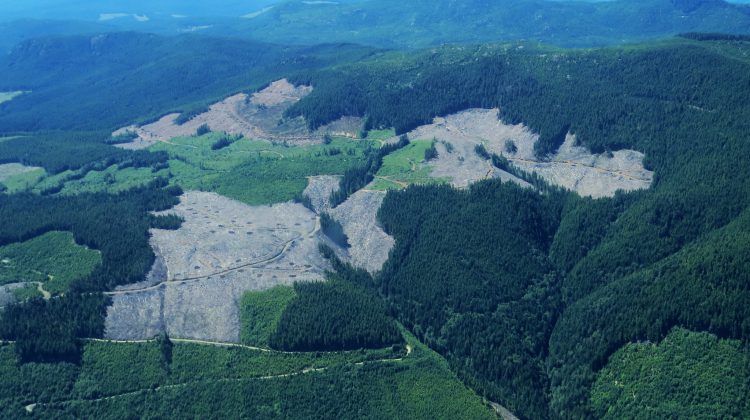 Aerial photographs of land next to Cowichan Lake, taken by Sierra Club BC senior forest and climate campaigner Jens Wieting in July 2018. Photo courtesy Sierra Club of BC

VANCOUVER ISLAND, B.C. – A pair of environment groups are claiming that old growth trees on Vancouver Island could be on the chopping block.

According to a release, environmental organizations Elphinstone Logging Focus (ELF) and Sierra Club BC say they have discovered that the provincial government agency is proposing cutblocks across the last intact old-growth rainforest areas on the island.

The groups claim that a 1,300-hectare area, equivalent to the size of more than three Stanley Parks, is intended to be auctioned for industrial clearcutting in 2019.

The information is based off a review of BC Timber Sales’ (BCTS) sales schedule.

The release notes that the proposed cutblocks include areas near Sayward (Ma’amtagila territory) and Gold River (Mowachaht/Muchalaht territory).

According to the two groups, the largest concentration of proposed cutblocks is near Sproat and Nahmint Lakes in Hupacasath and Tseshaht territories close to Port Alberni.

“Destroying the last great old-growth stands is a huge mistake that will be looked back upon by future generations as a huge travesty. Remaining intact forests are needed to create linkages within highly fragmented landscapes and to avoid tipping points when it comes to climate change and species extinction.”

Wieting claims that the proposed cutbacks only represents a fraction of the old growth logging on Vancouver Island overall.

“This is what… the government-controlled agency is proposing for the next year or so,” he said. “In addition, we have many other companies logging old growth. So overall, we’re looking at about 10,000 hectares of old growth logging every year. This is more than 30 soccer fields per day and it’s really quite shocking considering that there’s very little left.”

Sierra Club BC data shows that industrial old-growth logging continues at a rate of more than three square metres per second, or about 34 soccer fields per day.

In an emailed statement, the Ministry of Forests, Lands, Natural Resource Operations and Rural Development said that:

The statement did not address the specific concerns about the blocks of land in question.

Meanwhile, a number of environmental organizations including Sierra Club BC are calling for immediate action to protect remaining intact old-growth in order to safeguard threatened species, Indigenous values and a liveable climate.

The group’s release notes that the NDP’s 2017 election platform included a commitment to act for old-growth, promising to take “an evidence-based scientific approach and use the ecosystem-based management of the Great Bear Rainforest as a model.”

“But the B.C. government has not yet taken any meaningful steps to protect endangered coastal and inland old-growth ecosystems outside the Great Bear Rainforest,” according to the release.

Wieting said losing these kinds of old growth forests is a huge challenge for the web of life, including the plants and animals that depend on old forests with big trees.

He also believes this will hurt future industry.

“Based on the current rate, we will only have a few more years of logging, of these big trees – and industry is not prepared for transition, because there is no plan on how to reduce the rate of old growth logging in a way that will allow to be prepared for 100 percent second growth forests.”

According to Wieting, in the near future, it will be “very difficult” for communities and First Nations bands to find big cedar for special purposes such as canoes or totem poles.

“And by cutting down the last big trees at this rate, there will be nothing left for future generations,” he added.