Moving day for Howard the Gnome kept under wraps 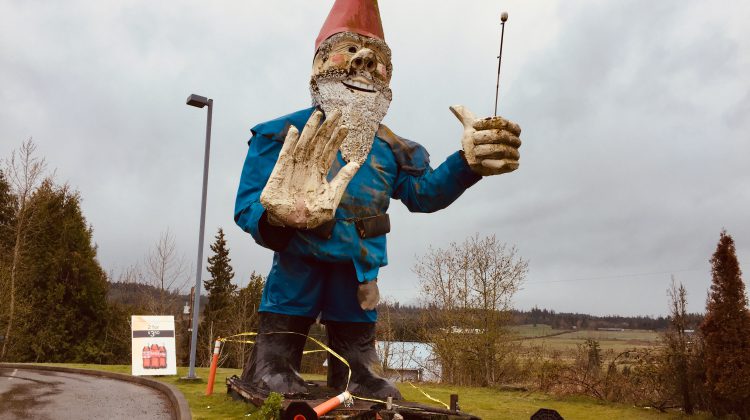 Howard the Gnome, pictured on a windy day in April, 2019. Photo by Troy Landreville/98.9 The Goat/Vista Radio

VANCOUVER ISLAND, B.C. – Howard the Gnome will be moving to a forever home.

Just when that will be happening, however, is being kept under wraps.

It was made official in late March that the giant statue, which has been a parked at the Nanoose Bay Chevron station for years, is headed to Galey Farms, a family-run business in Saanich.

Bridget Matewish, whose grandfather Ron Hale built Howard in 1997 for the family’s amusement park, said the new owners have signed a non-disclosure agreement as to when the statue will be moved.

“They won’t be letting anybody know when it’s happening,” Matewish said

“They don’t it to be a spectator sport because of liability reasons with the gas station.”

The search for a new home began after the Chevron station’s owners told the family that owns Howard that they wanted him taken apart for legal reasons.

After careful consideration, and many suitors, Galey Farms was chosen as Howard’s new home.

Matewish said the family is excited about seeing Howard once he’s settled at Galey Farms.

“We’re really looking forward to seeing what they’re doing with him, Matewish said.

“They’ve got a little environment set up for him already, they’re building him a friend and he’s got lots of mushrooms that he’s going to be living with, so it’s going to be a pretty cool set up.”