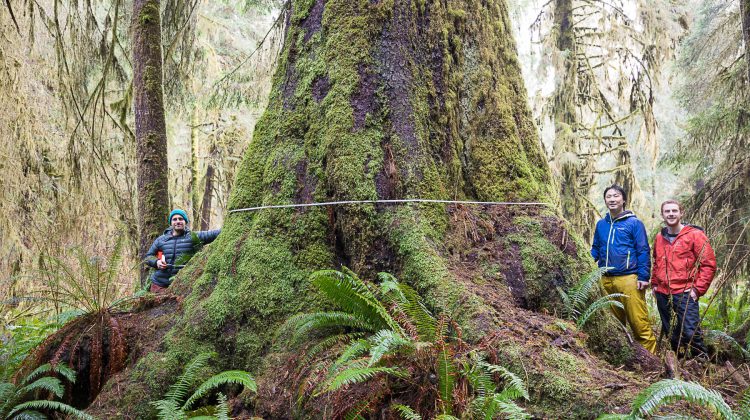 Credit to "TJ Watt" for the Photo.Left to right: Nathaniel Glickman (Volunteer), Ken Wu (AFA Executive Director), and TJ Watt (AFA Campaigner & Photographer), measure an ancient Sitka spruce tree in the unprotected FernGully Grove near Port Renfrew. At 11 ft in diameter, the tree appears to be within the top 10 widest known spruce trees in BC according to the BC Big Tree Registry.

Forestry and community stakeholders joined the B.C. Greens in calling for a moratorium to protect Vancouver Island’s vital old-growth forests.

He says 79 per cent of the original productive old-growth forests on the Island have been logged, including 90 per cent of the valley bottoms where the largest trees grow.

Minister of Forests, Lands, Natural Resources and, Rural Development, Doug Donaldson says the NDP is not managing the old growth forests on Vancouver Island to zero.

He says there are 500 thousand hectares of old growth forests that are protected, but he says he does acknowledge the concern and that’s why the province will be consulting the public about the issue in the very near future.

MLA Sonia Furstenau, deputy leader of the B.C. Greens says stakeholders and experts are clear the government is inflating the amount of productive old-growth that is protected from logging.