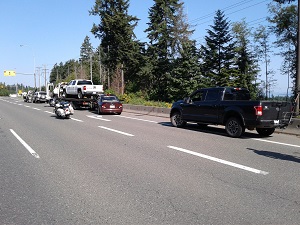 The photo shows 4 vehicles waiting to be being hooked up and towed for a minimum of a 7-day impoundment. (Photo provided by the Nanaimo RCMP)

Sometimes all you can do is shake your head.

For 2 and a half hours Monday morning police conducted LASER speed enforcement for northbound traffic along Highway 19 at Ware Road, the site of several recent collisions in which speed likely contributed to the seriousness of the injuries.

In the posted speed limit of 80 kilometres per hour, the Traffic Unit stopped 7excessive speeders.

The lowest speed recorded was 125 kilometres per hour and the highest was 148.

Four vehicles were impounded for 7 days.

RCMP say drivers need to get the message that speed continues to be one of the leading causes of fatal car crashes on BC streets and highways and the public should not be surprised to see continued speed enforcement throughout the month of May and into the summer months.