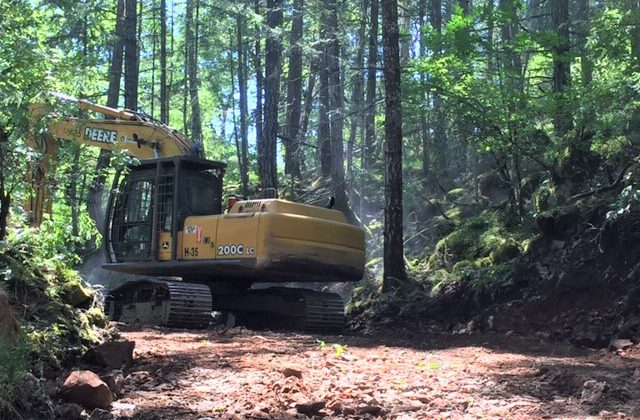 A crowd of more than 50 people gathered outside the main entrance to the North Cowichan municipal offices yesterday to protest what is going on in the municipal forest reserve. 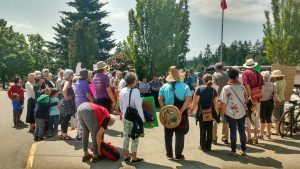 Protest outside of the North Cowichan municipal offices about concerns over the forest reserve. (Kyle Christensen, MyCowichanValleyNow.com staff)

Staff and council have said that two things, in particular, were going to happen in the reserve, the blowdown from the December windstorm will be harvested, and existing contracts will be completed.

Cowichan Tribes Elder Robert George said more consultation between council, staff, and the community needs to be had.

“I think we just need to preserve the forest and consultation is the most important thing, to hear from the people, so that’s the real issue right now,” said George.

North Cowichan Mayor Al Siebring said there is a fundamental misunderstanding that the public expects consultation on what the municipality is doing in the forest reserve in 2019.

“Council, collectively, has always said that in 2019 we would not do any conventional logging, except for what was left over from the 2018 contracts that we didn’t do, but that anything new that we did in 2019 would be focused just on the blowdown and that’s what we’re doing,” said Siebring. “People are upset about that and they’re saying, ‘Where’s the consultation?’ Well, the consultation is on what we’re going to do with our municipal forest reserve in 2020 and going forward.”

Many feel the blowdown should be left alone, but Shaun Mason the Municipal Forester said if it’s left where it is, it will increase the wildfire risk and the risk of beetle infestation (Ambrosia and Mountain Pine Beetle).

George said there is a delicate balance between people and the environment.

“We were always told not to go into the river during the spawning season because it will kill the eggs and that’s how delicate the ecosystem is,” said George.

Meantime, Siebring said the forest advisory committee, made up of technical experts, is going to come up with ideas for the use of the forest reserve in 2020 and beyond.

“They will come forward with some recommendations on what they think constitutes good forest management depending on what kind of goals we want to work toward,” said Siebring. “Whether those goals be recreation, whether those goals be forest fire prevention, whether the goal is to make money, whatever the goal is, they can come up with some models to suggest to us how that works.”

Siebring added that conversations into what to do with the blowdown went into the decision council made in January to harvest the blowdown and finish up the existing contracts.