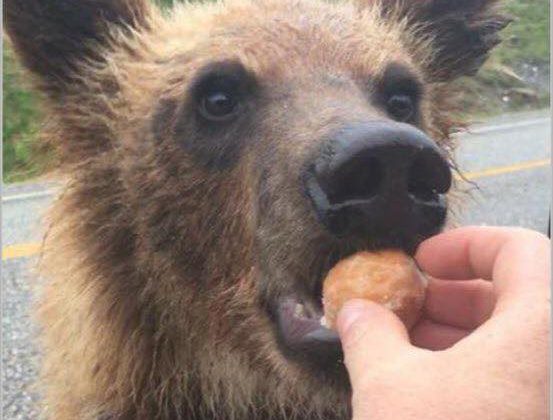 Make sure to secure your garbage and bear attractants. (supplied by BC Conservation Officer Service Facebook page).

There have been a number of bear sightings in the Duncan area in recent days, particularly, in the Gibbons Road and the old Lake Cowichan Road areas.

The BC Conservation Officer Service is reminding the public to do their part to avoid attracting these large animals and Sergeant Scott Norris said you’re the key to keeping these animals safe and wild.

“Homeowners need to remember that they’re the key to keeping bears wild and safe and healthy, which means locking up your garbage and any other food attractants, putting your bird seed away, pet food,” said Norris. “If you’ve got backyard chickens or anything like that, you should have them locked up at night, you should have them in electrified pens. You can get fairly inexpensive electric fencing kits for your backyard.”

Norris added, “We want to keep the bears wild and safe, everybody needs to do their part so the bears can co-exist with us.”

Bears follow their noses to easy food sources and while garbage is the number one attractant, birdfeeders, pop cans, barbeque grease, and oil and fat also attract these animals.

Norris said bears get sick when they eat garbage and homeowners need to be responsible and secure their garbage.

“When they’re walking in our neighbourhoods, they smell those garbage cans and if those garbage cans aren’t locked up in your garage, or in a shed, or somewhere secure, bears are going to try to access them,” said Norris. “Once they get that taste for garbage and human food sources, they will not forget it and it makes them sick.”

He said if a bear eats your garbage, it eats all of it, the plastic, the packaging, all of it, and it will get sick.