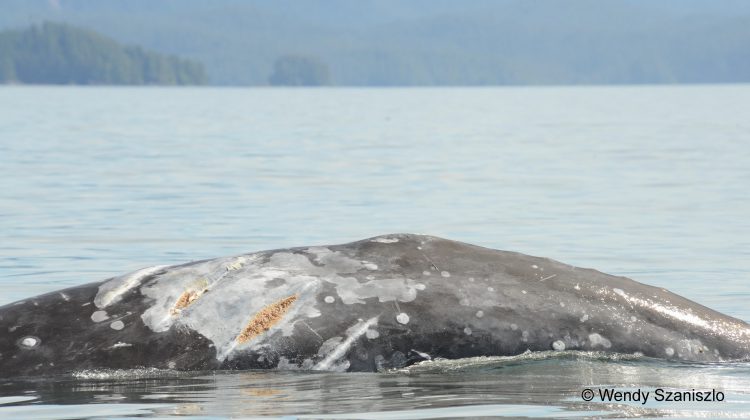 Grey whale is pictured, with scarring from scarring from having been hit by a boat. For Marine Mammal Regulations and measures to reduce risk of collision, see www.SeeABlowGoSlow.org. Photo courtesy of Wendy Szaniszlo.

VANCOUVER ISLAND, B.C. – Grey whales that have recently washed up dead along B.C.’s coastlines could be a sign of a changing world climate.

This is according to Jackie Hildering, who is the education director and humpback researcher with the North Island-based Marine Education and Research Society.

“What we’re learning this  year from grey whales is the potential impact of climate changes and therefore prey,” she said.

Hildering went on to say, “there’s a message there for us that, not surprisingly, the whales are indicators for what may be happening within the ocean when it comes to food supply and climate.”
According to the society, as of last April, there have been at least 40 dead Grey Whales found along the west coast from California to B.C. (three known on Haida Gwaii in last weeks) which it says “is an unusually large number.”
“That of course doesn’t capture how many are somewhere on B.C.’s rugged and remote coastline that we don’t find and how many have sunken to the bottom of the ocean,” Hildering said.
Many have been found to be severely emaciated and some have died because of ship strike.
“Recall that when Grey Whales begin their migration north, they are at the end of their annual fast so they would normally be thin but observations are that it is much more extreme than past years,” the society said in a Facebook post.
“The hypothesis for the emaciation is that climate/prey did not allow them to get enough food last season, whereby they may not have the reserves to survive the migration to the breeding grounds i.e. they are running out of steam.”
In the waters off Vancouver Island, Grey whales are most predictably seen on in the Uclulet/Tofino area.
“Only very, very recently is it understood that we actually have three populations in our waters that do different things, and that are to receive different protection under Canada’s Species At Risk Act, we’re not there yet,” Hildering explained.
“But of the three populations, two of them are determined to be endangered.”
Hildering said it is very difficult to get a handle on just how threatened the species really is: “There’s very little research done on grey whales in British Columbian waters. To get a sense of their body condition, the best way to do it is like the research that’s been done on killer whales: to get a drone high up in the air and take measurements downward and have a look at the whales from (up) high.”
Meanwhile, Humans can do their part to help preserve the species, Hildering stresses.
“It is not yet another problem,” she said.
“If we want to be precautionary, there is another (sign) of, ‘are we reducing our carbon footprint? Are we reducing our consumerism?’ Not needing to be perfect but understanding that could be happening is climate change. It’s real.”
Hildering said that while climate change hasn’t been proven to be directly related to the whales’ deaths, “it is certainly put forward that this is likely, that is of course going to create shifts in what prey is available for animals in the ocean, (and) animals generally.”
Another key aspect is for boaters to adhere to the ‘See a Blow? Go Slow!’ approach to marine mammals, to help avoid unnecessary collisions and encounters in ocean waters.