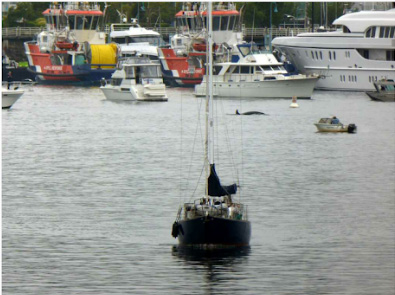 Four Orcas swim through during the Dragon Boat Festival in Nanaimo. Supplied by Bruce Shuck.

Nanaimo’s dragon boat festival had some iconic visitors yesterday, as four orcas joined the festivities in the waters between Maffeo Sutton Park and Protection Island.

It wasn’t confirmed whether these were the southern residents.

Researchers at the Department of Fisheries and oceans were concerned that they hadn’t seen the southern resident killer whales since late June, but they were spotted by researchers on Friday.

Members of J, K, and L-pod were spotted Friday and there are 74 remaining southern resident adults.