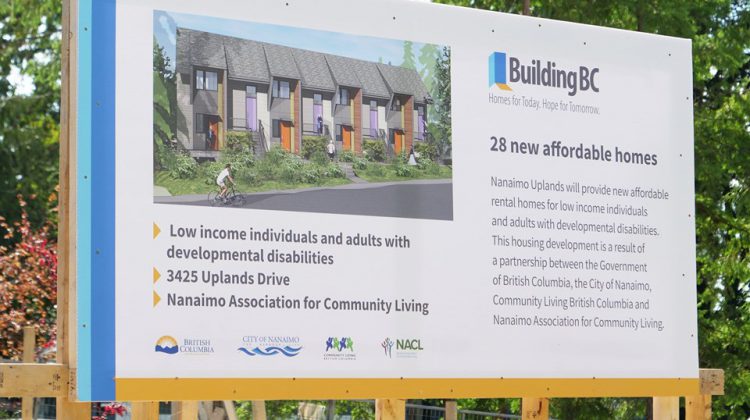 The Nanaimo Association of Community Living, Canada Mortgage and Housing, and the province gathered in the Harbour City to make a housing announcement earlier this week.

Twenty-eight new townhomes will include 12 accessible rentals at $500/month, 14 one-bedroom units, at $880/month and a live-in manager’s suite.

“A remedy for a long-standing and very serious problem in our community, which is a lack of affordable and suitable housing for a whole series of individuals and people who share some disabilities in this case,” said Krog.

The townhouses will be built at 3245 Uplands Drive and Krog said the city is always pressing the province for more affordable housing units.

“We are always pressuring and hoping that the province will continue to step up to the plate around affordable housing,” said Krog. “The units at the top end of Brechin Hill, the old Brechin United Church site is going ahead, construction underway there.

The Ministry of Municipal Affairs and Housing has committed to providing $4.9 million dollars for the project and the Nanaimo Association for Community Living is donating the land.

The townhouses will be ready by next summer.