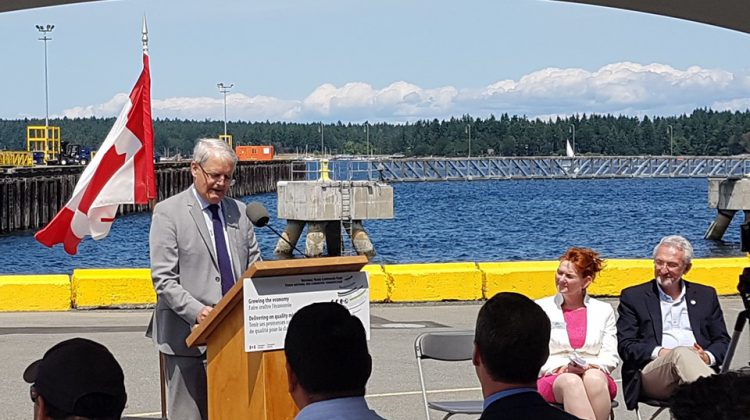 The federal government has announced $46.2 million dollars in funding to help the Port of Nanaimo make improvements and expansions at its Duke Point operations.

The existing wharf will be expanded, the existing crane will be replaced by two 24-metre cranes, a new warehouse will be built for general cargo along with a new maintenance and administration building.

Port of Nanaimo CEO Ian Marr takes us through what the expanded wharf will mean to operations.

“It will allow the simultaneous loading of a vessel and a barge on the berth face, both could be done with fixed gantry cranes,” said Marr.

Marr said the expansion will see the wharf extended from 182 to 325 metres.

“We’re extending our existing berth to the north and we’re going to create a 325-metre face on that berth, it’s within our existing footprint and extends the berth face from 182 metres to 325,” said Marr.

This expansion means an additional 900 jobs will be created.

A vehicle processing centre was opened at the Port of Nanaimo in the spring, creating 200 construction jobs and between 80 to 100 full-time workers.

The peak capacity of the processing centre is 50,000 vehicles.

The total price tag of the project is around $96 million dollars.