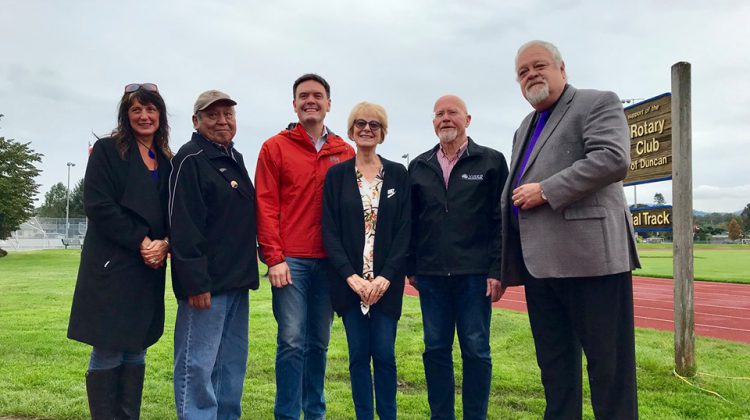 There was a big party at the Cowichan Sportsplex yesterday, as the Municipality of North Cowichan held a celebration.

The celebration was made possible through nearly $1.5 million dollars in funding from the federal and provincial governments, and a chunk by the operators of the Cowichan Sportsplex, the Chesterfield Sports Society.

“They’re working out of some portables, there are some mold issues, one of the portables you can’t even go into because of the problems with it,” said Siebring. “There’s also the Rowing Canada piece, what’s been designed for this field house is expandable.”

He added, “We still need to build a dryland training facility with Rowing Canada (they need to build it), but this is designed to be expandable so that potentially it could be one big building for both.”

The funding breaks down as follows:

The senior levels of government are providing $1,067,684 to the project and $388,316 dollars were raised locally through the Chesterfield Sports Society.

The field house will offer fully accessible washrooms and changerooms, a multi-purpose community meeting and event space, and an improved facility administration area.

Siebring said, “We put in a little bit of money, that was money that came out of our reverted property fund. When we sell a piece of property we own, we put that into a fund for community amenities and, in this case, this is one of those community amenities that we paid for.

“It doesn’t come out of taxes and I think this is a very positive project as it moves forward,” said Siebring.

He said he’s hopeful that the field house ground-breaking will be next fall, but that’s ultimately up to the Chesterfield Sports Society.