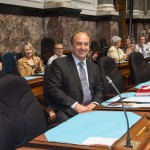 Green Party leader Andrew Weaver in the BC Legislature - Photograph courtesy of www.andrewweavermla.ca 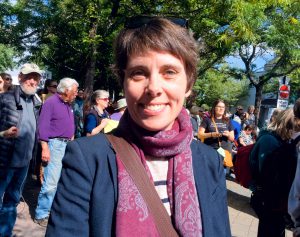 Green Party leader Andrew Weaver says he’s stepping down as leader and will not run for re-election in 2021.

He made the announcement Monday morning as the BC Legislature began its autumn session.

Weaver told the legislature he was making the announcement now to allow plenty of time to choose a new leader for the BC Green Party.

Cowichan Valley Green MLA Sonia Furstennau says Andrew Weaver’s legacy is one to be proud of.

Among his accomplishments, Furstenau points to the province’s climate action plan, Clean BC.

Furstenau says she, Saanich North and Gulf Islands MLA Adam Olsen, and Weaver will continue to work together and are committed to the Confidence and Supply Agreement with the New Democratic Party.

The BC Green Party Provincial Council is expected to meet later this month to set up a committee to oversee the leadership contest.

A decision on a new leader may be made at the party convention in Nanaimo in June of next year.

Weaver is a climate scientist who left his position at the University of Victoria to run in the provincial election as a Green candidate in 2013.

He was the lone Green MLA until the election of 2017 when he was joined by Sona Furstenau who was elected in the Cowichan Valley and Adam Olsen representing the Saanich North and the Islands riding.

Weaver had reduced his workload after a health scare in September.