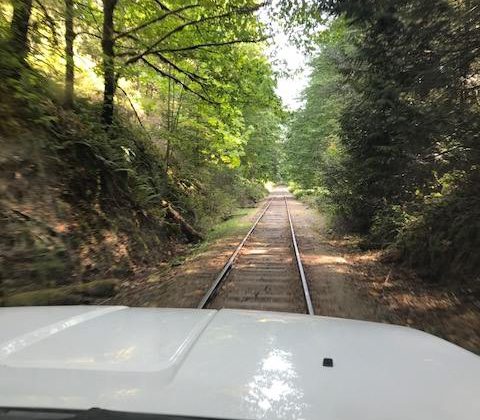 The Island Corridor Foundation has been busy giving dignitaries a first-hand look at the E & N rail line and what it will take to offer rail service as an alternative to the much-maligned Malahat.

The ICF gave City of Duncan Mayor Michelle Staples a ride from Duncan to Nanaimo today in preparation for a provincial report, expected to be released before the calendar turns to 2020.

Staples was just the most recent elected official to take a ride on the rail, as Esquimalt Mayor Barb Desjardins and Langford Mayor Stew Young have already taken similar rides on the track.

The province is set to release a report, complete with a cost analysis, before the end of 2019.

A number of alternatives to the Malahat have been floated, including ferry service between Cowichan Bay and Patricia Bay, a bridge over Finlayson Arm and the recommissioning of the E & N rail line.

The rail option looks like the most realistic one and Staples said the rail option was far more enjoyable than driving the Malahat.

“I keep thinking of that experience versus this one, it’s absolutely stunning. I’m going by the ocean, the leaves are changing, it’s an absolutely beautiful experience compared to what I sat in (on the Malahat),” said Staples. “I would choose this hands down over sitting in a car in traffic as a way to commute.”

The E & N line runs from Victoria to Langford and north to Courtenay.

A second track runs from Parksville to Port Alberni.