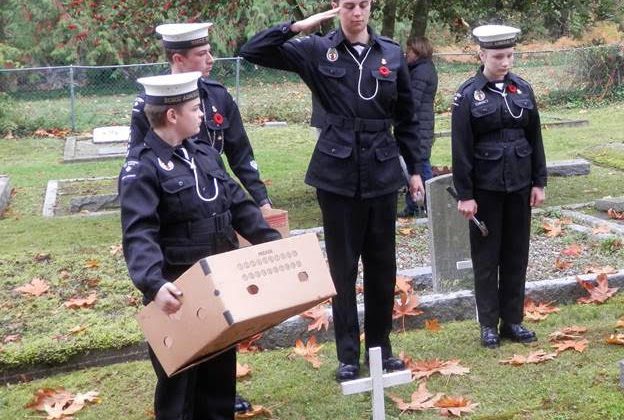 It’s a tradition as the calendar turns from October to November, as Sea Cadets from 100 Royal Canadian Sea Cadets Corps place white crosses at gravesites.

When the Cross of Sacrifice in Charles Hoey Park was erected back in the 1930s, when observations shifted to veterans who died and are buried overseas.

About one thousand veterans are recognized in the Cowichan Valley and Mike Bieling of the Old Cemeteries Society explains the significance of these white crosses.

“Our practice commemorates people who did come home and died here and are buried here,” said Bieling. “It’s interesting for me, I got involved about 16 years ago, doing a survey of veteran stones and met the people that were organizing the event at that time.”

Bieling said, “I discovered what it still means to veterans, to their families, and to survivors all around the valley.”

Bieling said a lot of veterans are honoured, but he needs help in finding more local veterans that deserve to be honoured.

“We recognize about one thousand veterans in the valley altogether and that’s just a fraction of the number that probably exists here,” said Bieling. “It’s an endless project to try and encourage people to let us know about their father or their grandfather or their mom or their grandmother, or aunts or uncles that were in the service, that are resting here, so we can include them in this. ”

Earlier today, 45 crosses were be placed on the graves of veterans in historic All Saints’ churchyard in Westholme, on the banks of the Chemainus River.

Tomorrow, members of the 744 Royal Canadian Air Cadet Squadron will be setting up and saluting 452 veteran crosses at Mountain View Cemetery and St. Mary’s Anglican Church on Somenos Road in Duncan.