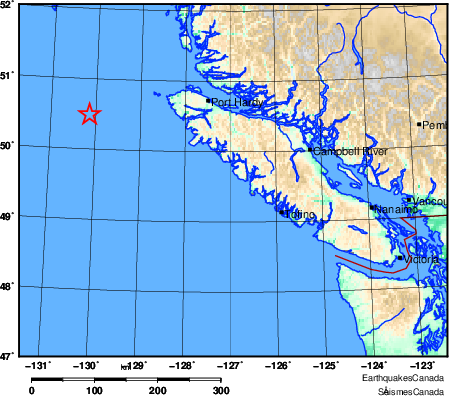 A strong earthquake struck an area in the North Pacific to the west of northern Vancouver Island on Christmas Eve, followed by two smaller quakes in the same area on Christmas Day.

Earthquakes Canada reports the Christmas Eve quake measured 6.2 and was located 188-kilometres west of Port Hardy at a depth of five-kilometres.

There are no reports of damage and none would be expected.

At 8:25 am on Christmas morning, and then again at 12:38 pm in the afternoon, a pair of smaller earthquakes were recorded in the same area.

The Christmas Eve earthquake was the seventh and strongest quake in the area in less than 48 hours.

There were six earthquakes on Monday, December 23, all off of North West Vancouver Island that ranged from magnitude 4.3 to magnitude 6.0.