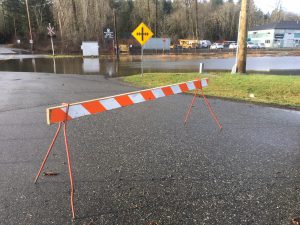 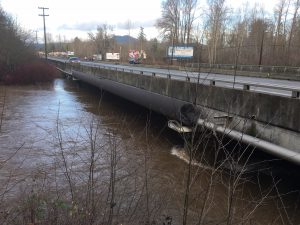 The threat of further flooding has subsided, but the Cowichan Valley Regional District says the valley will remain in a state of local emergency until further notice.

At the height of the flooding, residents in an area of Crofton in North Cowichan and residents of Halalt First Nation were evacuated, and the Trans Canada Highway between Duncan and Chemainus was closed for several hours Saturday morning.

The high water also closed several local roads, but some are now able to be used again.

Kris Schumaker of the CVRD says in the early morning hours of Saturday, as they were evacuating residents in the Crofton area it was decided to open a Level Two Emergency Center at CVRD headquarters.

Schumaker says the emergency center stood down Saturday night but reconvenes Sunday to assess the situation throughout the valley.

- Advertisement -
At about 10 o’clock Friday night, first responders in North Cowichan began to evacuate people in a Crofton neighbourhood.
The evacuation lasted into early Saturday morning as firefighters went door to door to warn people they had to leave their homes as floodwaters were rising.
Jolene says firefighters knocked on her door around 230 am. She and her husband had little time to collect personal belonging before climbing into a boat that firefighters had pulled up to their deck.
She says they escaped with their two pets and the clothes they were wearing.
A BC Transit bus took the evacuees to the Cowichan Community Centre, which was opened as a shelter for about 28 residents of North Cowichan and the Halalt First Nation.
The regional district is asking residents to keep up to date by regularly checking the CVRD website and the North Cowichan website in case the situation worsens.
Residents can also check the BC Hydro website for updates on power outages.
- Advertisement -
Facebook
Twitter
ReddIt
WhatsApp
Email
- Advertisment -
- Advertisment -
- Advertisment -