British Columbians Give Themselves High Marks for Social Distancing 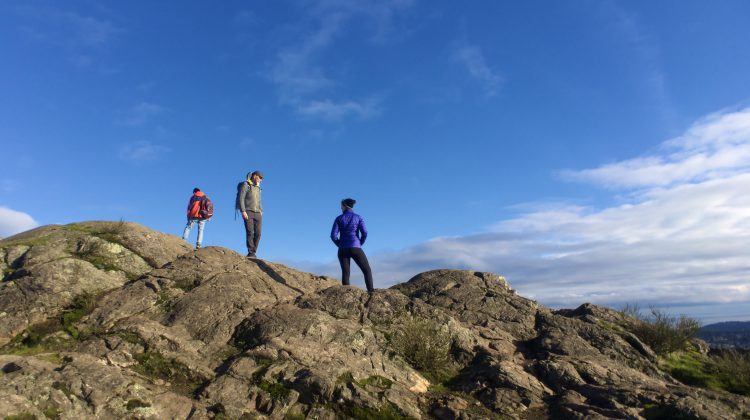 British Columbians have a very favourable view of their own social distancing practices, but disapprove of how others are performing.

Older residents also rate the social distancing habits of people under 30 as being poor.

Insights West surveyed more than eight-hundred British Columbians recently, asking them to rate their adherence to social distancing on a 10 point scale. The majority, 89 percent gave themselves a score of 8, 9, or 10, with 41 percent putting themselves right the top. The remaining 11 percent felt they rated from four to seven, but none put themselves at 3 or lower.

However, when asked for their view of how others are practicing social distancing, only 4 percent rate the habits of other people as 10.

Thirty-five percent gave others a social distancing score of 8 or 9, and 47 percent of people said others score only a 6 or 7 on the scale.

The general perception of how young adults are social distancing is negative.

Only 2 percent of older British Columbians feel 18 to 34 year olds deserved a 10 on the social distancing scale. Fifty-five percent gave young people a rating of 5 or lower.

On the flip side, the poll found people in the 18 to 35 group rated their social distancing behaviour higher than the public average. Ninety-one percent gave themselves an 8 or higher, and 42 percent rated themselves at 10 out of 10.

However, the 18 to 34 year olds also rated the performance of their peers at a much lower level. Only 12 percent said other young people deserved an 8 or higher on the 10-point scale.

Seniors were viewed much more favourably by others: 19 percent of British Columbians gave this group a 10 out of 10, and 66 percent scored them at 8 or higher. 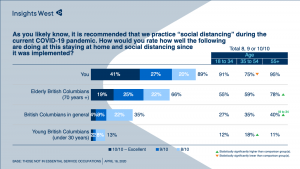 Insights West president Steve Mossop calls it “an interesting phenomenon that individually we think we are doing a good job in social distancing, but we don’t think our neighbour is doing the same”

He believes “public instances of shaming offenders—whether it be social media or news-driven, has given us the perception that we are doing worse as a society than what we are actually doing.”

Mossop says what surprises him is “the extent to which people are leaving their homes—clearly we can do a better job on this front.”

Insights West found that people are not adhering very well to the recommendation to stay home and indoors. The average British Columbian has left their house roughly twice a week to shop for groceries, once per week for other shopping needs, about 3 times to walk or exercise, and multiple times for other reasons. 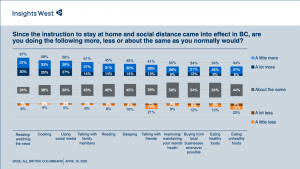 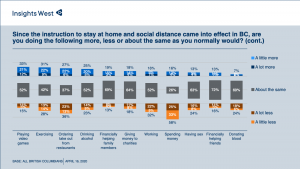