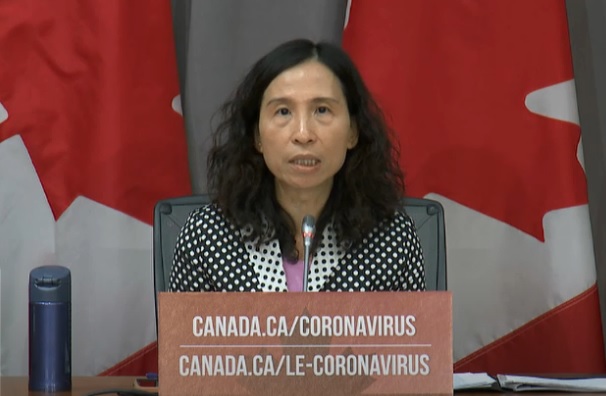 Dr. Theresa Tam says slowing the growth of the epidemic curve will be based on overcoming the different regional outbreaks. With more tracing being a major factor in bending the curve, Tam says Health Canada is carefully looking at using digital surveillance applications. She says concerns over privacy will be paramount in any decisions about these apps.

Tam also said that even though we are talking about reopening in the coming weeks, mass gatherings specifically sporting events, will not be happening anytime soon.

Meanwhile, clinicians in the United Kingdom have recently noticed a new symptom of COVID-19 in children. Dr. Tam says the latest in pediatric literature is being shared globally including any observations from the UK.

She says in addition to the known response to the virus some people have reported immunological reactions or inflammatory responses.

Tam says pediatrics is a very important focus in the government’s response to COVID-19.  She says children under the age of 10 tend to have very mild symptoms and it appears they may not be key transmitters.

According to Tam, Health Canada is aware of the frostbite like rashes on kids’ toes but is quick to point out that very little is known about this situation.

She says these symptoms were presented just as a general alert to the UK’s clinicians and they do not know whether it is linked to the virus.

She notes that viral infections, in general, do result in some of these observations.

Tam says Health Canada and pediatricians as well as physicians are in constant contact and are always informed of the latest on COVID-19 symptoms.