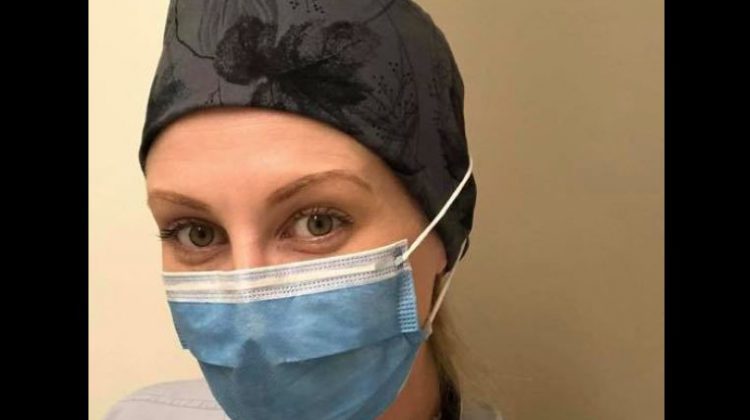 “People started ordering from us, and it got a bit overwhelming,” Spencer said. “So we’ve basically used up our personal stashes at home and then we had to buy more. We’ve got a few public donations but if we intend to service the North Island area we’re going to need more fabric, and we’re just sort of hoping that people think, ‘Yeah, it’s a good cause,’ and help out our health care workers.”

The Campbell River resident started the Facebook group to share information and tips on making and distributing the caps.

The group has grown to 178 members.

“It’s gone kind of crazy,” Spencer said. “I’ve had a lot of new members. I started up the Facebook group originally to connect up with other people in Canada because I’ve been following an Australian Facebook (group) where they were servicing the whole country and they put out thousands (of caps). So I thought we could do that if we hooked up each province, and found people to sew in their neighbourhood.”

Caps have been delivered to patient transporters in Montreal, as well as orders from Ontario, Alert Bay, and a maternity unit in Victoria.

Closer to home, Spencer says there are “eight amazing sewers” in the mid-island region, making the caps.

“We could always use more, yes… yes, please,” she said. “We would desperately like more hats but my team is producing a phenomenal amount. So far this week, I’ve collected 127 hats to deliver on Tuesday.”

Spencer has delivered 227 caps in Campbell River and Courtenay, alone.

The concept was born from a text exchange between Spencer and a Facebook friend of hers, Allya Hutchins, who’s a nurse at Comox Valley Hospital.

“When COVID came up, I texted her and said, ‘Do you want me to make you some masks?’” Spencer said.

“She called it her war effort,” Hutchins related. “At that time, I didn’t think we were going to be using cloth masks and I wasn’t sure if that was best practice, so I asked her to hold off.”

A week later, Hutchins sent a text to Spencer, asking about scrub caps.

“So I said, ‘Sure, I’ll make you some hats, how many do you need?’” Spencer said. “So I thought I’d just make them for her and her closest friends. So here we are.”

As the pandemic unfolds, Spencer said she continues to be concerned about the well-being of healthcare workers.

“It’s not just gratitude, it’s worry,” she said. “I have a student that’s a nurse and I worry about her. So yes, I was happy to make some hats. It was never really my intention to make it a country-wide thing. It just kind of snowballed.”

If you’re able to donate fabric or funds, or want to help out in other ways, you can contact Spencer by email (ljspencer@telus.net) or on the Scrubs caps Canada Facebook page.