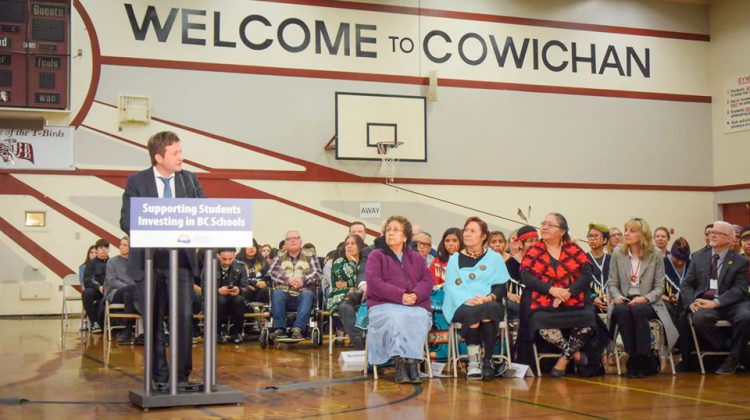 A Neighbourhood Learning Centre will be part of the new Cowichan Secondary School, earmarked for completion by September 2023.

The Cowichan Valley School District Board of Trustees has passed a motion to include Indigenous Language and Culture, Health and Wellness, and Innovation and Technology.

School District 79 Board Chair Candace Spilsbury said the Province provides a percentage of the school to accommodate community interests that support both student learning and the community.

“When we received the announcement that we had a new replacement Cowichan Secondary School with space for 11-hundred students, we were also given the space that we could allocate to the enhancement services that would support our students and honour the community,” said Spilsbury.

Spilsbury said the Ministry of Education with Ministry of Finance support, provides a percentage of the school to target community interests.

“In their new building arrangements or framework, they provide a percentage of the school to accommodate community interests that are supportive of student learning and a community.

The Neighbourhood Learning Centre will be a key piece of the new $82 million dollar school and working groups are already forming to map out what those spaces will look like and what they will be used for.

The school board and the Province are early in the design phase and services can either be located in one area or spread throughout the school.

There are many steps before construction can begin and Spilsbury said the tentative September 2023 opening is subject to many tasks being completed on time.

The next step involves the Chief Project Officer and Architect presenting a preliminary design to go forward with.

Companies will then submit bids to build the school.

In other news, since early April, the school district has expanded the face-to-face instruction in the Cowichan Valley from 20 students in eight schools to 120 students in 13 schools.

These childcare services are available to the kids of essential workers.