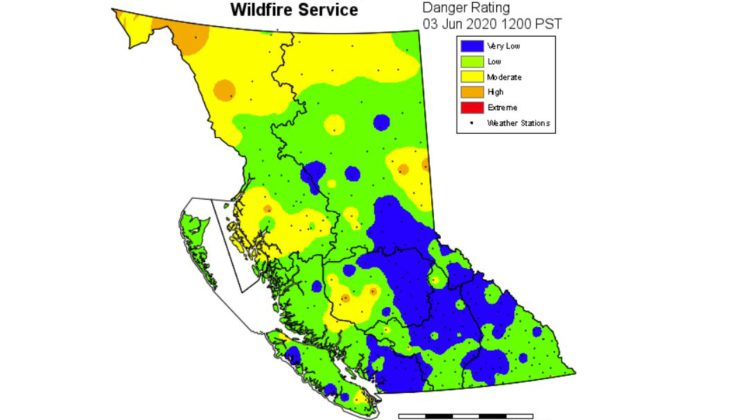 BC Wildfire June 3 fire danger rating. (Supplied by the Province of British Columbia)

The Coastal Fire Centre is stressing vigilance, even with a low wildfire danger rating across most of the region.

“So far we haven’t had any lightning-caused fires on the coast and that’s good news, so we do need people to do their part. It’s a great thing with everything that’s going on right now to centre yourself in the forest, but when you’re out there, please take care of it. It’s something that we all enjoy and we need to make sure that it doesn’t burn.”

MacPherson said wildfire activity on the coast is on course with its 10-year average.

“Fire starts are about the same,” MacPherson said. “We have a little bit higher hectarage burned but that’s because we have that one fire up Magee Road up near Squamish that got to be a fair size.”

Apart from that, activity has been very low in the last week.

“We haven’t had any fires at all so that’s good news, and that has to do with the weather,” MacPherson said.

June sets the pace for the wildfire season on the coast, MacPherson said. “A nice, wet, June with nicely spaced rain in between really gets the forest healthy and ready for the fire season and that’s what we’re seeing in our forecast for now.”

Vancouver Island has been quieter than the mainland.

We’re coming off a tame wildfire season. While on-average it was two degrees warmer than usual, we just got enough rain to keep fires relatively in check.

Last year, from April 1st to Sept. 17, wildfires had burned 322 hectares in the region.

The service is predicting that the wildfire season will be “close to average,” she said, before warning that could change quickly.

“We’re not seeing anything at this point that might indicate a very active fire season. Of course, fires react very strongly to weather patterns and weather and climate are very different. So if we do get a period of no rain and very hot and dry weather, we could expect the fire activity to pick up quite a bit.”

To mitigate the risk, the BC Wildfire Service has a province-wide prohibition against all open fires except campfires with its jurisdictional areas.

MacPherson is asking that you report any violations that you see to the RAPP line at 1-877-952-RAPP, or *7277 on your cellphone.