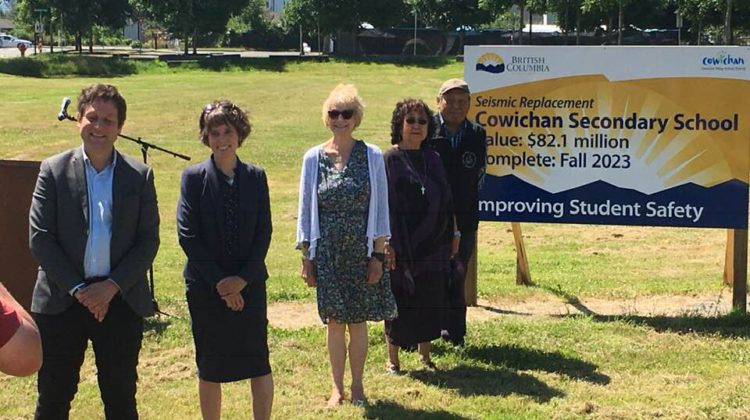 The $82.1 million dollar Cowichan Secondary School replacement is one step closer to reality after an announcement on Monday.

Cowichan Secondary School opened in 1950 and its replacement is slated to open in 2023. The existing school is bursting at the seams and is unable to accommodate the growth in enrolment within the district.

School District 79 Board Chair Candace Spilsbury said Monday’s event was significant and there is cause for celebration.

“It’s a sign that’s a physical reminder of the site and the tremendous work the community has undertaken to arrive at this point and it was a bit of a celebration about the things to come,” said Spilsbury.

Cowichan Valley Green Party MLA Sonia Furstenau was also on hand and she was joined by other dignitaries, including Cowichan Tribes Chief William Seymour and Minister of Education Rob Fleming.

Furstenau recalls when Fleming took a tour of the existing Cowichan Secondary School in 2017, shortly after the election and saw, firsthand, the need for a replacement.

“He met with the school district, the trustees, and the local elected leaders and we gave him a tour of the old school and helped him to recognize how urgent the need was for a new school to be built. We’re delighted that this has happened now and that there will be a new school for Cowichan,” said Furstenau.

The site of the new school will be in downtown Duncan, behind the Community Centre, and adjacent to VIU Cowichan.

Spilsbury said the new school will make a major impact throughout the community.

“It’s going to be an incredible, new, innovative school that will prepare our learners in that school and prepare the community around various aspects of learning,” said Spilsbury.

Furstenau said the sign is a symbol of a decade of collaboration and hard work by everyone involved.

“It’s a great event to just commemorate that we are moving forward with this new high school for Cowichan and it’s a real testament to the legacy of the hard work of so many people who have got us to this point, literally over ten years of work inside the community to get us here. I’m really proud of all that work,” said Furstenau.

Construction on the school is anticipated to be completed by the fall of 2023.