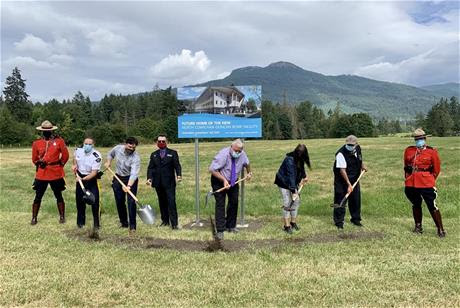 It will be a much larger and more modern building that will allow municipal and provincial officers, forensic, traffic enforcement, and members of Indigenous policing to work together in the same location.

Construction is expected to begin in early 2021 and be completed in the fall of 2022.

Mayor Al Siebring is pleased to see the project getting underway “as getting to this point has been years in the making.”

“A project of this scope involves numerous partners, whom I’m excited to celebrate with today, and I want to thank everyone involved for their dedication and commitment in getting this project off the ground.”

Inspector Chris Bear called it an exciting day, “We have long outgrown our current space, and with the many advancements in law enforcement over the last 40 years, this new building will meet the needs of a contemporary policing model, accommodating the enhanced operations and necessary policing technologies to provide enhanced public safety.”

The current detachment building was built in 1980 to accommodate 30 RCMP officers and support staff, but there are presently 85 people working there.

North Cowichan says it plans to use innovative materials, such as mass timber, and wants the new facility to be built with specific energy consumption targets in an effort to be “net zero ready.”

The Municipality of North Cowichan will fund 40 percent of the cost with the RCMP paying 60 percent.

Borrowing of the now estimated $49-Million total construction budget was approved using the alternative approval process rather than a referendum.