All Was Well as Arctic Fox II Prepared for Fishing 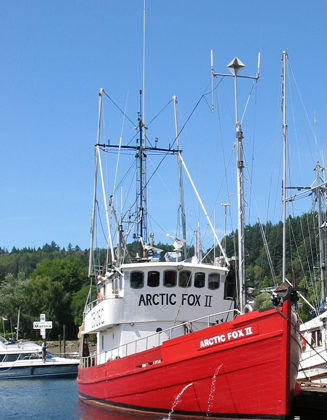 The manager of the Cowichan Bay Harbour Authority says everything was normal as a commercial fishing vessel prepared to depart.

Early Tuesday morning, the Arctic Fox Two started taking on water and then sank about 90 kilometres off Cape Flattery, southwest of Port Renfrew.

Only one of the three men on board survived.

Mark Mercer spoke to the captain of the Arctic Fox II and it’s two crew members while it was docked and loading provisions and equipment.

“There was nothing that was any different than any other year as they geared up and wait for the fish to come across the border so they can go fishing.”

Mercer says he knew the captain of the Arctic Fox II and it came as “quite a shock” when he heard the vessel was lost.

“I did know the captain very well, unfortunately, I didn’t have an opportunity to meet the crew, say for more than a short conversation on the dock, but they were very excited about the opportunities in front of them.”

Mercer says the captain was well experienced and he believes at least one of the two crew members had experience.

The Arctic Fox II is owned by Teague Fishing of Shawnigan Lake, registered in Victoria and its home port was Cowichan Bay.

The vessel was built in Scotland in 1947.

The US Coast Guard says that at about 2 am Tuesday morning, the 20 metre vessel sent out a distress call saying it was taking on water.

The helicopter found the surviving crew member in a lifeboat and hoisted him into their aircraft.

Canadian and US searchers located and recovered the bodies of the other crew members on Tuesday and the BC Coroner’s service says they have been taken to Victoria.