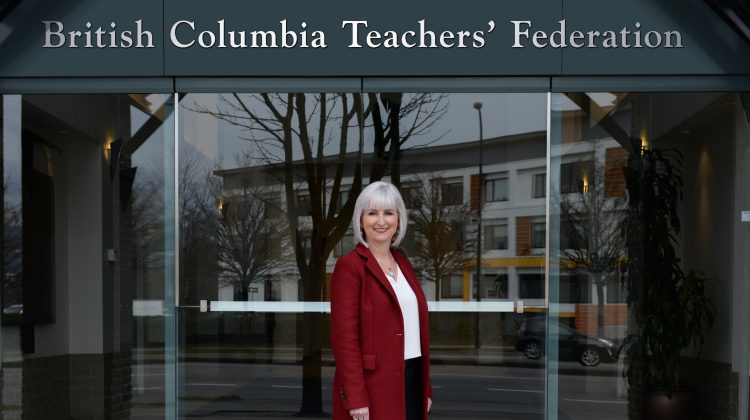 We spoke with Teri Mooring about some of the pressing issues with the first week of classes just around the corner.

She touched on a number of topics including remote learning, federal funding, classroom density, masks, and cohorts.

What is the BCTF’s position on the restart plan?

TM: Ever since the restart plan was announced at the end of July, we’ve said it needs work and that we were willing to continue to work with the government on improving it. So we’ve got 25 teachers in working groups and they have been working in those groups all summer, and we also have representatives on a steering committee.

What we see is there is still more work to do, and we think the infusion of the federal dollars, so the $242 million (going to B.C.), will really help support a safer restart plan.

Have there been any new developments over the past couple of days?

Unfortunately, we did not hear it that clearly from the minister during the news conference. So we are really concerned that there will be an inequitable application of the opportunities of that remote option across the province and we feel very strongly, and we have heard from many parents, that that remote option is necessary.

How much of a demand is there for remote learning?

TM: Apart from distributed learning, and apart from homeschooling we’ve heard from many, many families that want the option of not sending their child to school right away but having them be able to access their education remotely, and then when they’re ready, send their child to school, and their space in that school is protected and available for their child when that happens.

That’s what we understood that option to be. We’re now concerned that not all school districts will offer that option and that’s because we’re hearing from families about that.”

A lawsuit has been launched claiming the back-to-school plan endangers students, teachers, and the public. What is the BCTF’s view of this?

TM: We’re aware of the lawsuit. There is a similar one launched by parents in Quebec. We’re not a part of that and so we’re not sure what’s going to happen with that.

Moving on, what do you feel the federal funding should go towards?

TM: We feel strongly that, with the additional funding from the federal government, we think that needs to go to reducing classroom density. We think there’s a real opportunity for the province, now, to do that, with that funding.

That’s been one of our strongest pushes is that classroom density needs to be reduced in order to facilitate physical distancing. We know that physical distancing is one of the important preventative measures in terms of the actual spread of the virus and we see that as absolutely necessary in schools.

What is the BCTF’s stance on masks?

TM: The only time students are required to wear masks, and adults for that matter, is when they’re out between cohorts. So that’s in the common areas, that’s in hallways, that’s on buses, that sort of thing… (so) when cohorts are basically mixing. Other than that, in classrooms and within cohorts, masks are not required by either teachers, support workers, or students.

We disagree with that.

We see masks as an important measure that needs to be a part of the plan. Our recommendation is exactly the same as the federal public health office, which is, children 10 years old or older should be wearing masks in schools, in cohorts, (and) in classrooms. And also, teachers and support staff and the other adults in the building, we feel the need to be wearing masks, as well.”

What’s next for the BCTF?

TM: Today, we have a provincial representative assembly. We’re meeting to take a look at our plan moving forward. We do see there is a short amount of time, now, before school starts. We still need to see changes. We need to see changes to classroom density, to the mask-wearing policy, to the remote option for families, and to improvements to ventilation and HVAC systems. Those are the areas that we see as pressing. There are other issues that we have as well, but those are the ones that are very pressing right now.

We see no reason why that all can’t be accomplished given the additional funding from the federal government.

Do you believe you will have a plan in place from the meeting?

TM: We expect to exit the meeting with a plan.