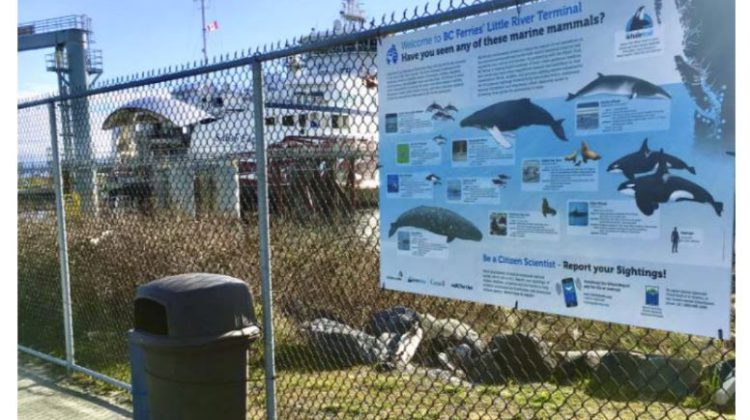 BC Ferries is on board with the Whale Trail.

It’s a series of shore-based locations to view marine mammals along the Pacific Coast.

In partnership with the Whale Trail and the BC Cetacean Sightings Network, with funding support from Fisheries and Oceans Canada, BC Ferries installed interpretive signs at three of its terminals where whales may be seen.

Signs are now in place at the Tsawwassen terminal, Little River terminal in Comox, and the Langdale terminal on the Sunshine Coast.

The Whale Trail is a non-profit organization based in Seattle, Wash., with a mission to inspire appreciation and stewardship of orcas, other marine mammals, and the marine environment.

In B.C., the BC Cetacean Sightings Network manages the citizen science program that encourages reporting sightings of cetaceans (whales, dolphins and porpoises) to gain information about species distribution patterns.

BC Ferries vessels have been regularly reporting sightings to the BC Cetacean Sightings Network since 1975.

“We work with scientists and whale researchers on a variety of initiatives, and joining the Whale Trail is another way our customers can learn about cetaceans in our waters and BC Ferries’ ongoing support for research and conservation,” said BC Ferries’ Vice President & Chief Operating Officer, Corrine Storey.

“We are committed to helping advance awareness and to sharing the ocean space with whales, dolphins and porpoises.”

BC Ferries has been working with the Port of Vancouver Enhancing Cetacean Habitat and Observation (ECHO) program since 2014.

The company also partnered with Port of Vancouver and Ocean Wise to develop a “Whales in our Waters” tutorial for mariners in 2019 and contributed to the “Mariners Guide to Whales, Porpoises and Dolphins of Western Canada” with the Coastal Ocean Research Institute and Port of Vancouver in 2016.

BC Ferries says joining the Whale Trail is one more in helping to “build awareness of local whale species to contribute to their conservation for generations to come.”