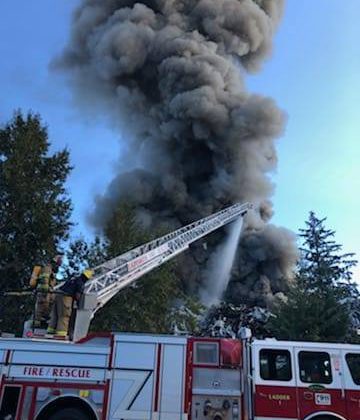 Water samples taken from wells in the immediate area of a massive industrial fire south of the Nanaimo airport have found no contamination of the groundwater.

Firefighters from numerous fire halls fought the blaze at Schnitzer Steel near Highway-1 in Cassidy for hours on September 10, pouring thousands of litres of water on the fire as it spread through a pile of recyclables, including car parts, tires, plastics, and discarded packaging foam.

The CVRD says there are no advisories related to these drinking water wells, or to the broader aquifers in the area.The water is considered safe for consumption.

An ongoing monitoring plan is being developed to ensure drinking water within the area remains safe to drink.

The plume of smoke from the fire had initially created concern over air quality in the vicinity, in addition to worries about groundwater contamination.