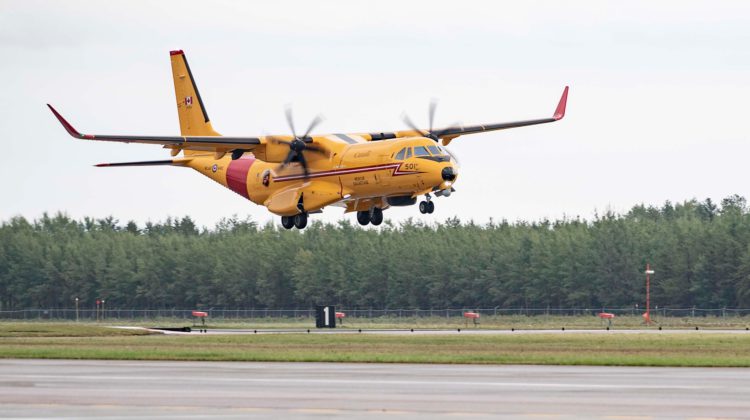 The CC295 arrives in Comox. (Supplied by the Department of National Defence)

Search and Rescue teams that cover Vancouver Island and the West Coast have an historic new addition to the fleet.

You may know that the Air Force base at 19 Wing Comox uses helicopters to pluck stranded hikers from the forest, and boaters from the ocean.

The crew is also known for its big, yellow “Buffalo” fixed wing aircraft. 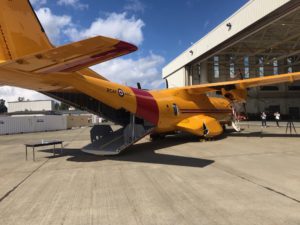 Defence minister Harjit Sajjan was at the base today to welcome the new addition.

“As outlined in Canada’s defence policy, Strong, Secure, Engaged, it is essential that our search and rescue crews have the modern and effective aircraft they need to carry out this critical work,” Sajjan said.

“I am thrilled at the arrival of this first CC-295 Kingfisher in Comox as it represents another successful milestone for this project, while also supporting our mission of being strong at home.”

Specifically designed to perform search and rescue missions across Canada, the aircraft is equipped with integrated sensors that will allow crews to locate persons or objects from more than 40 kilometers away, even in low-light conditions.

Its communications systems will increase interoperability with other search and rescue assets, such as the CH-149 Cormorant.

The fleet of 16 aircraft will be replacing the CC-115 Buffalo and CC-130H Hercules fleets in their search and rescue role at four locations across Canada, and represents a value of $2.4 billion.

The aircraft received earlier this month will remain at 19 Wing Comox while the RCAF completes aircrew training, followed by operational testing.

During the transition period and while the CC-295 Kingfisher is being operationalized, fixed-wing search and rescue services will continue through existing fleets, along with the CH-149 Cormorant and CH-146 Griffon helicopters.

Part of this project includes the construction of a new training centre, which is being built in Comox by Canadian training leader CAE. It includes ten classrooms, as well as sophisticated training devices such as a full-flight simulator, a cockpit procedures trainer, a sensor station simulator, and an aircraft maintenance trainer. The centre will be used to train both maintenance and aircrews.

The rugged and often inaccessible terrain, severe weather, and large expanses of sparsely populated areas make the Victoria SRR the most demanding region in the country.