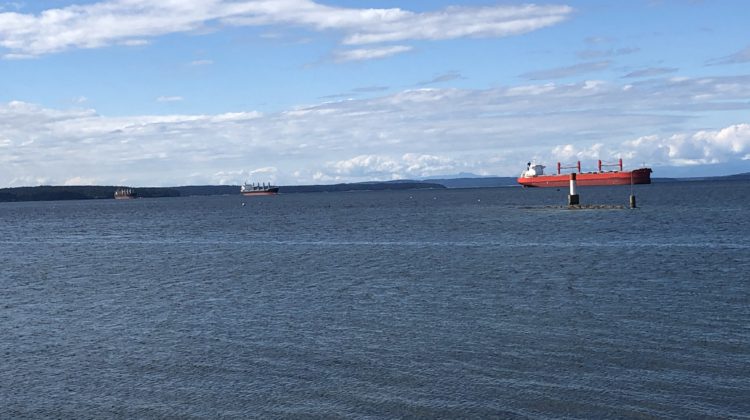 They dominate our marine landscape, and a Vancouver Island MP is trying to get those ocean freighters moving.

Cowichan-Malahat-Langford MP Alistair MacGregor said these massive boats can park in our Vancouver Island coastal waters for weeks at a time, waiting for the Port of Vancouver to call their number.

MacGregor says the problem is with our shipping system.

“The fact that we are seeing these freighters come with increased frequency, increased duration, really speaks to how inefficient our whole shipping system is. To have a freighter, in some cases, lying in wait for up to six weeks,” said MacGregor.

In an email to our newsroom, Transport Canada said, “As a trading nation, Canada needs an efficient marine transportation system, which includes anchorages. The right to anchor a vessel is part of the common law right of navigation. Vessels use anchorages for many purposes, including when waiting for clearance to enter a port or preparing holds before taking on cargo. For more information about how vessels use anchorages, please visit our website.”

MacGregor has tabled a bill to prevent the freighters from anchoring here.

“I want to use this bill (C-250) as a focal point to have that broader discussion about how efficiently we are managing our shipping into the Port of Vancouver,” said MacGregor.

In an email to our newsroom, the Vancouver Port Authority said the Port has seen an increase in traffic, especially in grain from the prairies.

In a release from MacGregor’s office, he says over the last several years, community and First Nations groups have repeatedly called on Transport Canada to protect ancient clam beds, prawns, oysters, and endangered species, including the iconic southern resident killer whales.

“Dialogue with government officials has confirmed that the pumping of ballast tanks, pumping of bilges, dragging of anchors, dumping of garbage and waste, and continuous noise from generators have combined to seriously threaten our livelihoods and traditional ways of life,” said Chief Joan Brown of Penelakut Tribe. “The Federal Government has the lawful obligation to consult with us prior to permitting freighter parking in our traditional waters. Penelakut Tribe has had absolutely no consultation from the Federal Government.”

Transport Canada said, “Work on the Anchorages Initiative is ongoing. Transport Canada officials continue to engage with a range of key stakeholders, including port and industry players, as well as Indigenous and coastal communities, to define and gather feedback on key challenges they perceive.  The protocol was developed with the Chamber of Shipping of British Columbia, the Shipping Federation of Canada, Pacific Pilotage Authority, Vancouver Fraser Port Authority, and Port of Nanaimo. In addition, the department is examining legal, operational, and commercial considerations that have bearing on anchorage practices and management. Transport Canada also considers information from concerned citizens as part of this work.”

The Trudeau government has proposed the establishment of a National Marine Conservation Area here.

But MacGregor comments that Transport Canada’s inability to address the concerns over freighters endangers the very waters they aim to protect.

“People have witnessed them (freighters) dragging their chain. There’s concern about when we have inclement weather, how they would handle that,” said MacGregor. “There have also been some concerns about marine pollution, the fact that some crew members have been witnessed power-washing the decks into the ocean, the noise and light pollution that people have to endure because they are required (by Maritime Law) to keep lights running on both the bow and stern for navigation purposes.”

Transport Canada said “Marine shipping has never been safer in Canada. Canada’s strong marine safety system has improved significantly over the last 25 years and continues to improve through the Oceans Protection Plan. Our marine system is built on more than 100 regulations, 30 acts, international agreements, and commitments which are first and foremost focused on preventing accidents from happening. We are committed to the continuous improvement of this system.

“These freighters sometimes drag their anchor, disturbing our seabeds and harvesting areas’, said Lyackson First Nation Chief Richard Thomas. “They have their lights on all night and make noise. They take away the beauty of our beaches. They harvest illegally and pollute our waters, and their proximity to our reserve lands makes our nation fearful of trespassers. We were never consulted on this and don’t support the freighters being in our waters.”

Transport Canada said, “Regarding noise and light concerns related to vessels in southern British Columbia anchorages, residents can contact the Vancouver Fraser Port Authority Operations Center and provide details by completing an online form.  This practice was instituted to help address community concerns. Transport Canada officials continue to work closely with the Port on this matter to help ensure concerns are addressed.”