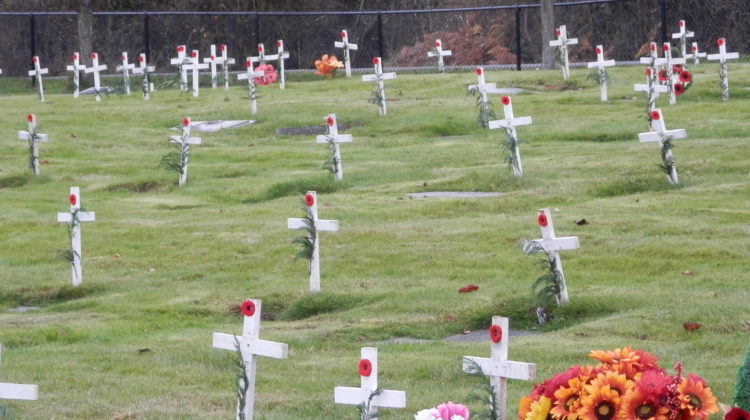 Remembrance Day is a little more than a week away and volunteers are busy acknowledging locals who served in the Armed Forces.

Cemetery volunteers and those who volunteered through social media have placed crosses at cemeteries around the Cowichan Valley.

Mike Bieling with the Old Cemetery Society said 10-15 names are added every year, but he relies on families to come forward.

“I know we’re nowhere near honouring everybody. I think at this point around the entire valley, given what we’re doing, there are several local Anglican parishes that do a similar practice over Remembrance Day as an independent thing,” said Bieling. “Altogether, I think we’re probably marking just over a thousand graves. Clearly, there’s a lot more veterans buried here that we may never find out about, (but) we do the best we can.”

Bieling said pre-pandemic, members of the 100 Royal Canadian Sea Cadet Corps laid crosses at the gravesites of veterans around the region, but due to COVID-19 health protocols, they aren’t allowed to this year.

Cemetery volunteers and those who came forward on social media have helped place remembrance crosses at several cemeteries throughout the Cowichan Valley, in honour of locals who served.

“Anybody who has a family member who has not received a cross, who deserves one, who was a member of Canada’s or Allied Armed Forces, we’ve got people from military forces, from resistance forces,” said Bieling. “It’s a pretty wide-open definition of who qualifies as a veteran and we’d like to hear about them and recognize them. (We’d like to) get a few notes on their story.”

Most placements are complete and Bieling said the dates and times of the placements weren’t made public to adhere to safety protocols.