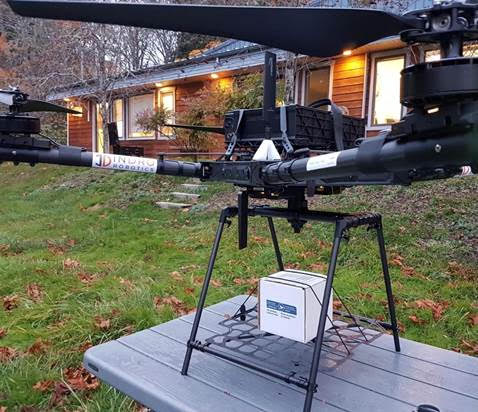 A new way to have your packages delivered to you is coming in the near future.

Vancouver Island-based InDro Robotics is the first company in Canada to receive approval to carry commercial goods by drone.

The team is based out of Salt Spring Island, and last year they partnered with Canada Post and London Drugs to fly the first successful delivery of emergency medication over the Pacific Ocean.

The drone travelled from Duncan to Salt Spring Island in just 11 minutes.

CEO Philip Reece says they have been working closely with many different organizations to see what the technology is capable of.

“We originally deployed with the first responders, …… where we learned an awful lot about how to make drones truly operational. There’s nothing quite like a drone that gets thrown in the back of a truck and then gets off the other side to fly and work.”

“We did lots of missions with them in all sorts of temperatures and conditions, gained good approvals from Transport Canada.”

He says the drones are able to fly “from cell tower to cell tower, without us having to see the drone,” which allows them to travel to remote locations in B.C while also bringing connectivity to areas that require service.

Reece says because of the new commercial approval from Transport Canada, the company is currently working on many different tests, including teaming up with the University of British Columbia for a pilot project which would help deliver your packages to a local mailing box.

“So we’re doing hospital to medical center now, next is business to business, then probably retail to retail, and then eventually we’re going to get business and retail to customer,” explained Reece.

“We’ve got a project on the go with UBC where we’re building these large cluster boxes. The drone lands on to the cluster box, lets go of its cargo, its cargo falls into one of the six containers, and as it goes in, the person who is waiting for the mail gets an email and they can go receive their parcel.”

Reece says custom-built drones can handle up to 10 kilograms in cargo and could deliver pretty much anything you can fit into a shoebox.

“There’s no real limit to what the item could be. We got all sorts of permission to fly everything from medical supplies to commercial goods, to your passport you forgot on the way to the airport.”

If you live on the North Shore, Reece says you can already experience receiving your parcel via drone.

“We have a program going on at the moment with Harbour Air where you could put an item on the seaplane in Victoria, have the seaplane fly it to Vancouver and then once it arrives in Vancouver, swap it over to a drone and have it fly to the North Shore.”

While the company works on expanding service for British Columbians living on Vancouver Island and the Sunshine Coast, he says they hope to pave the way for others to follow.

“I don’t think it is so much as competition, we’re obviously honoured and pleased to be first, but we’re eager to help those that are also looking at the same business path. Obviously, they won’t have to go through quite as many hurdles as we have, but we welcome them on the journey.”