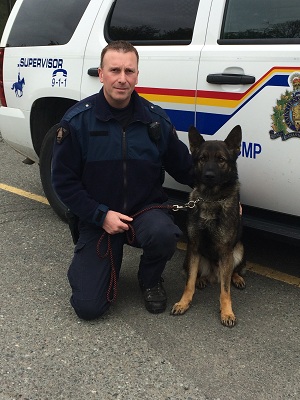 A missing kid is safe and sound thanks to the efforts of local RCMP and a police dog.

North Cowichan/Duncan RCMP Sgt. Chris Swain says they got a call on Tuesday that a 10 year old had run away from a special needs centre.

He says the kid was found later that day on Genoa Bay Road in North Cowichan by Cst. Garfield Henderson and his partner Enzo, a three-year-old German Shepherd.

Swain says dogs can really help police out in situations like finding missing people or locating drugs, bombs or evidence.