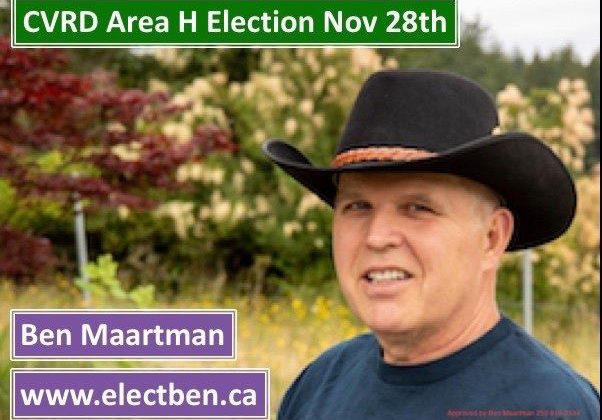 The official Area H Byelection numbers are in.

Ben Maartman beat out Murray McNab by eight votes and he replaces Mary Marcotte as the director of the electoral area.

Maartman said Area H is a tightly-knit community and collaboration is key in the electoral area.

Maartman said taking over in the middle of a pandemic is extremely challenging.

“Colin Haime has done a great job as an alternate, but it’s hard to get out and meet people. That’s what the role of any director or anybody that is representing is to meet people and chat with them, learn and listen and that’s hard to do during a campaign that says ‘keep your distance, keep a mask on, avoid unnecessary contact,’” said Maartman.

Maartman said the support of longtime Area H Director Mary Marcotte means a lot to him and helped him win the byelection.

This marks the second time since 2018 that McNab has lost by less than ten votes in an election.

The swearing-in ceremony is tentatively set for December 8th.