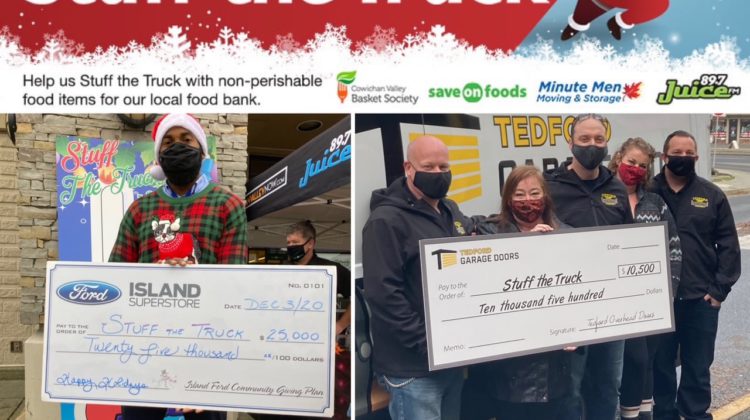 In the end, the large backdrop with a giant thermometer reading 200 was not enough as the pallets of food donations kept rolling in and the numbers 300, 400, and then 500 had to be added.

Businesses and people in the Cowichan Valley really stepped up to make Christmas brighter for less fortunate families during the coronavirus pandemic and donated generously to the 89.7 Juice FM Stuff-the-Truck campaign.

Julie Winter, National Sales Director of Vista Radio, the parent company of 89.7 Juice FM, says there were a total of 528 pallets at the close of the campaign Friday evening.

One-hundred-and-five pallets were pre-sold in the Corporate Challenge, and Winter says there are still some rolling in.

In 2019, the number of pallets donated during the Stuff the Truck campaign was just under 190.

Every year in communities from British Columbia to Ontario, Vista Radio stations raise donations of food, clothing, and cash for less fortunate families at Christmas.