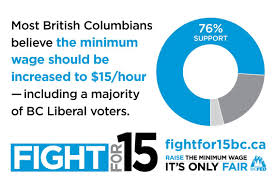 A new poll shows two-thirds of people in the province support a $15 an hour minimum wage.

The BC Federation of Labour had Insights West conduct the poll for them.

Lanzinger says the poll shows people aren’t happy with the province’s plan to increase the minimum wage by just 20 cents.

She says that’s why they’re continuing their Fight for $15 campaign. The poll shows 68% of people support the goal of the campaign.

The poll was conducted between March 24 and 27, and the margin of error is plus or minus 3.5 percentage points, 19 times out of 20.