A Life-Saving Partnership on Vancouver Island 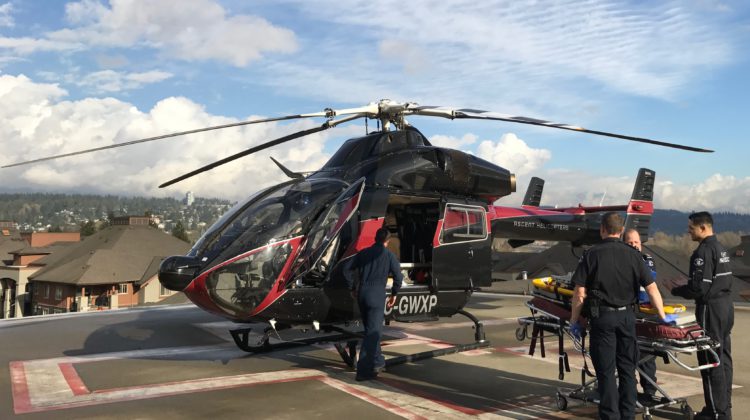 “Time is your only enemy, it disappears very quickly and never gives you a second chance,” excerpt from The Aussie Expat: The Luckiest Man on Earth by Steve Douglas.

An air ambulance partnership between BC Emergency Health Services (BC-EHS) and Ascent Helicopters is reducing the length of time it takes people to get medical help from hours to minutes.

Lance Stephenson with BC-EHS said he has no doubt that the new helicopter will help save lives.

“Let’s use Bamfield as an example or Zeballos, it takes us a fair amount of time to get out to the patient and takes us just as long to get back on a very rocky road, not a very comfortable transport for the patient,” said Stephenson. “If the patient has serious, traumatic injuries or even medical issues then moving them to the hospital takes sometimes six, seven hours.”

Stephenson said before the launch of the new chopper, BC-EHS helicopters were coming from YVR and would sometimes be grounded due to weather when it was clear on the island.

He said people will be flown from the scene to Victoria hospital for things like trauma, stroke, or cardiac issues

Stephenson explains the difference between transporting patients in the ground and air ambulances.

“It will give people a better chance getting to the appropriate resource or hospital that they require for their particular injuries,” said Stephenson. “So, if you have a critical care trauma patient mid-island that has to go by ground, often they would stop in Nanaimo to be stabilized and then, potentially, transferred again by ground, or by air down to Victoria or Vancouver.”

He said the person that nearly drowned in Little Qualicum River earlier this week got from the scene to doctors and hypothermia specialists in Vancouver in a fraction of the time it would have taken by ground ambulance.

On another call, two days after deployment, the team attended a roll-over in the Nanoose Flats. Stephenson recalls that the victim was transported from the scene to Victoria hospital in 35 minutes.

Stephenson said, “(The) helicopter will not be stationary, waiting for that critical care call.” It, in fact, will be used for low and mid-acuity patients that need to be moved from those isolated, very remote areas.”

The only reason the funding was made available for this new air ambulance was COVID-19 and Stephenson said, “I’ve gotta give credit to the pandemic, it’s given us access to some of the funding that we require to get the resources in place.”

The helicopter will be based in Parksville, and teams of critical care paramedics will be stationed with the aircraft.

Stephenson points out that the chopper is a small, dual-engine, dual-pilot aircraft that can land at any hospital on Vancouver Island.