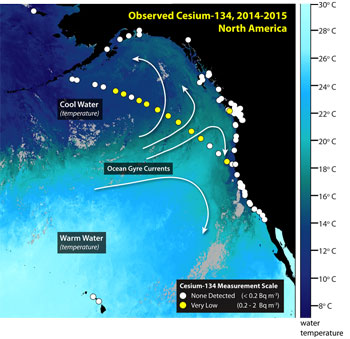 Trace amounts of radiation have been detected along the coast of Vancouver Island. It’s the first positive sample from North American shores since the Fukushima nuclear disaster.

The reactor suffered major leaks in the aftermath of the 2011 earthquake and tsunami in Japan.

Ken Buesseler is a Senior Scientist with the Woods Hole Oceanographic Institution. Since 2013, WHOI scientists have been collecting samples at more than 60 sites along the west coast of North America, testing for radioactive isotopes.

Buesseler says the amount of cesium detected in a sample collected February 19 in Ucluelet is very small.

Buesseler says its well below what would constitute a risk to people or marine life. Still, he says the Woods Hole team will continue the monitoring work.

Buesseler says this first positive sample is from the front edge of a plume of contamination that has spread across the ocean from Japan, so it’s possible that higher levels of radioactivity will be detected in the future.

(Photo of Ken Buesseler with Fukushima plant in the background, from WHOI website)