BC Green Party leader Sonia Furstenau and other local leaders are speaking out against a backlash developing in the Cowichan Valley over the Cowichan Tribes Shelter-in-Place order and admission regarding how many people have tested positive for COVID-19.

The Cowichan Leadership Group has issued a statement saying municipal leaders in the community are “sickened at the racist response” by some people in the valley.

Furstenau says Cowichan Tribes is taking steps to limit the spread of the virus and should not have to face racist comments for its transparency in the matter.

“We don’t succumb to fear and judgment, racism, hatred in this, we rise to what is needed of us at a time like this, which is a higher level of kindness and compassion and empathy.”

North Cowichan Mayor Al Siebring posted his response on Facebook during the weekend to comments on social media, including calls for off-reserve First Nations workers to be let go from jobs.

In Siebring’s words, this is “racism, pure and simple.”

Duncan Mayor Michelle Staples also spoke out on social media to remind people the pandemic is a time to remember the virus “does not care who we are or where we are from,” and it’s only people that discriminate. 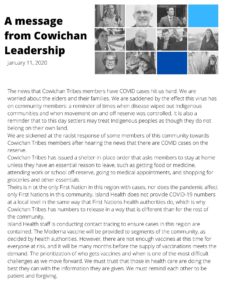 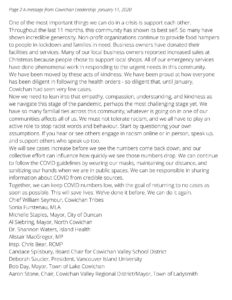