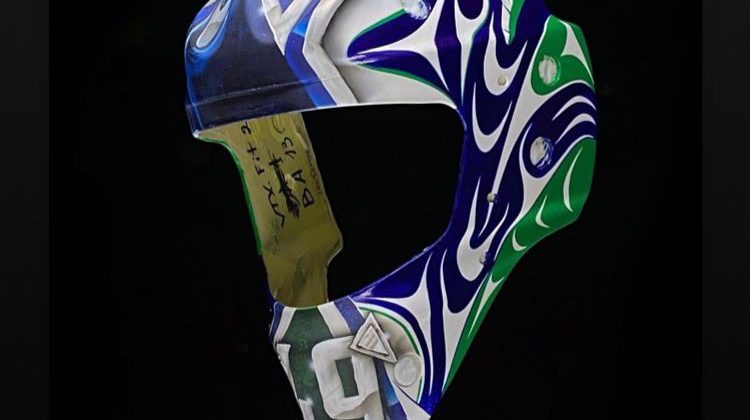 Image courtesy of Luke Marston Facebook Page
From controversy to collaboration, creating a First Nations themed mask for Canucks goaltender Braden Holtby ultimately became the art of reconciliation.
Holtby now has an authentic Indigenous themed mask based on a traditional Coast Salish story to wear during Canuck’s games.
The controversy began when Holtby wore a mask during a game that had a Thunderbird created by a Swedish artist.
Learning of the outcry on social media, Stz’uminus artist Luke Marston reached out to Canucks owner Francesco Aquilini with an offer to create a genuine Coast Salish design.
According to Marston, “it was really blowing up on social media and I talked to them again and the equipment manager Ken O’Neill had called me and asked me if I was gonna do it and I said yes. I would love to do it.”
He says Holtby turned out to be very interested in West Coast Indigenous art.
Marston asked if Holtby wanted to revisit the Thunderbird motif, but he was reluctant and asked if there were other traditional stories from the West Coast.
“I shared with him the stories of the Orcas and the wolves transforming back and forth to hunt on the land and beneath the ocean.”
Once the theme was agreed upon, Marston then reached out to Swedish artist David Gunnarsson who had created the original and they collaborated on the final design and artwork for Holtby’s new mask.
Marston says a lot of people feel the federal government is not really willing to reconcile with First Nations, but that doesn’t mean that Indigenous and non-Indigenous people cannot work toward it on a person-to-person basis.