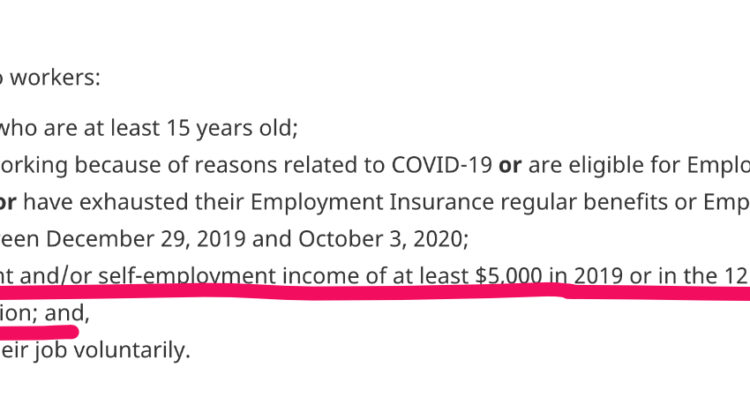 Nanaimo Green Party MP Paul Manly will present a petition next week in Parliament asking the Canada Revenue Agency to reconsider asking some self-employed people to give back the CERB payments they received.

More than 7,300 people have signed the e-petition, which calls on the government to retroactively allow self-employed individuals to use gross pre-tax income before business expenses to determine CERB eligibility.

Manly says these are people who honestly thought the threshold was the gross income that they had earned, not the net income.

In the case of self-employed individuals, there are deductions that can be used to reduce their income before determining the taxes they are required to pay. That is considered their “net” income.

The word “net” was not included on the CRA webpage outlining eligibility.

What people saw was that self-employed Canadians were eligible if they made more than $5,000 in the previous tax year, or in the 12 months before making their application.

The CRA has recently mailed letters that define eligibility based on “net” self-employment income of at least $5,000. The letters warn that recipients may need to repay up to $14,000 due to ineligibility.

Manly says the finance minister had “stated last March that it was the gross income,” and the CRA also told people who had called in that it was “earned revenue or gross revenue” that they could use to determine their eligibility.

He adds, “even government MPs got it wrong,” and provided incorrect information to constituents.

The petition states the government has acknowledged that both CERB eligibility guidelines and government advice “failed to specify clearly” that gross income for self-employed people referred to gross income after initial deductions.

In Manly’s opinion, “lots of people were doing their due diligence, trying to make sure they fit into the program, and applied in good faith.”

He says low-income self employed Canadians who applied for the CERB believing they were eligible are now facing large debts to the CRA as a result.

“They used that money to pay their rent, put food on the table and, you know, take care of their families.”

He cites the example of an elderly woman on a pension that worked part-time as a contractor for extra income with Granny GoGo, and is now expected to repay all $14,000 she received.

In another case, Manly says a self-employed man who built and repaired guitars for musicians – who were no longer able to perform publicly – received a letter saying he has to payback all $14,000.

The Canada Revenue Agency has sent out more than 440,000 letters to people indicating they may may not have been eligible.

Manly says it’s the “government’s mistake, and they need to own that mistake.”

The online petition was open for signatures until January 23, and Manly plans to present it to the House of Commons next week.