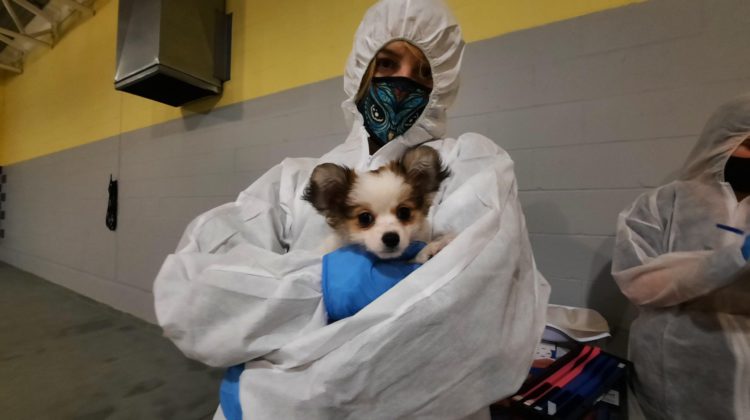 A photo of one of the pups taken from the Duncan Home earlier this week, provided by the BCSPCA

The BCSPCA says unethical dog breeders looking to cash in during the pandemic are putting animals at risk.

This comes after 12 dogs were removed from a breeder in Duncan.

The four adult dogs and eight three-month-old puppies were seized because of what the SPCA is calling the ‘lack of veterinary care’.

Eileen Drever, the senior officer of protection and stakeholder relations for the BC SPCA told our newsroom that because of the pandemic many people, and animals, are being taken for granted.

“I know of people who have purchased mixed bred puppies for well over 1000 dollars, which was unheard of years ago. I do believe are being taken advantage of during this time which is really unfortunate,” she added.

Drever explains that many people are turning to animals for emotional support, which is okay, but you have to do your own research ahead of time so cases like this don’t happen.

“If you want to adopt an animal, check out your local rescue facility. Check out your local SPCA or animal control facility or alternatively, go to the Canadian Klub of Canada website and you’ll see breeders there. There’s nothing wrong with purchasing a dog from a breeder, as long as it’s a reputable breeder.”

“It’s safe to say, just do your homework before purchasing from a breeder.”