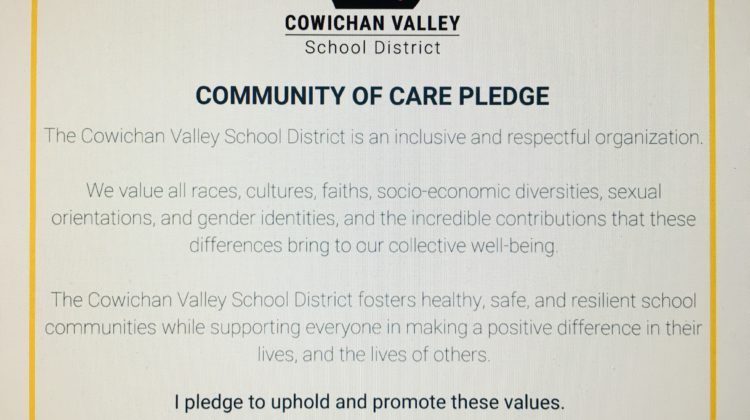 The Cowichan Valley School District is coming out strongly against hate of all forms and is asking members of the community to be part of the commitment.

At Tuesday night’s school board meeting, trustees signed a ‘Community of Care Pledge.’

The school board has included a link to the pledge on its website and invites the public to sign as well.

Chair Candace Spilsbury says they want to show the community the district “will stand up for what is right and we recognize the specific struggles of so many groups that have been traditionally marginalized.”

Spilsbury says they hope members of the public will sign the pledge to “send a strong, unified, signal and work towards creating a community of care.”

To participate, people can go to www.sd79.bc.ca/pledge to add their name to the list of community supporters.

Cowichan Valley School trustees are taking a stand against what they say is “ongoing racism directed at our Indigenous communities, specifically Cowichan Tribes.”