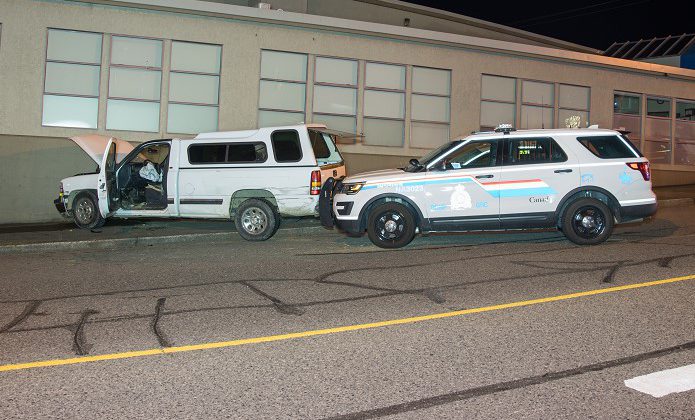 A man is in police custody after driving his vehicle into multiple police vehicles and causing thousands of dollars in damage. He only stopped when an officer used his own police vehicle to pin the suspects vehicle next to a building to prevent his escape. There were no reported injuries to any officers involved.

The incident began at approximately 11:45 pm on Monday March 15, 2021, on Terminal Ave near Comox Road.  A marked police car heading to a call with lights and sirens on was side-swiped in the north bound lane.

The suspect vehicle continued at a high rate of speed, northbound on Comox Road. The officer was not injured and managed to broadcast a description of the suspect vehicle to other officers. At the time of the collision, there were no other vehicles driving nearby.

Moments later, an officer spotted the suspect vehicle and began following it. The vehicle, described as an older model grey pickup was followed to the intersection of Prideaux St. at Fitzwilliam, which is where the RCMP police detachment is located.

RCMP say the driver appeared to steer his pickup intentionally into two police vehicles that were parked on the side of the street. He then drove into the side of a building. As he was attempting to back up and drive away, his vehicle was pinned by the approaching police vehicle.

The suspect driver then got out of his vehicle and charged at the officer, who used his Taser and pepper spray to bring him under control, and put him in handcuffs.

In total, 2 police vehicles incurred extensive damage and 2 others had superficial damage. All however are out of service until they can be repaired.

The 57-year-old Nanaimo man is facing numerous charges. RCMP did not release any motive for the man’s actions.