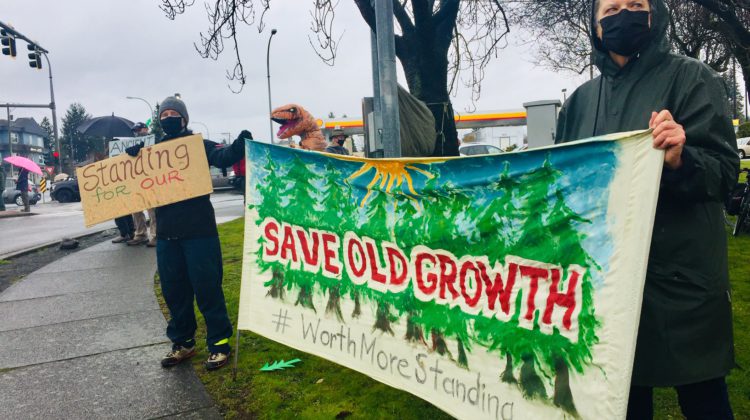 Rallies were held at 29 locations across the province today, to speak up for the protection of our remaining old growth areas.

March 19th is a province-wide day of action and marches, with rallies happening in Nanaimo, Duncan, Sechelt, Courtenay, Powell River, and Port McNeill, just to name a few.

Supporters are calling for  “sustainable forestry management, permanent conservation of remaining old growth forests, and the well-being of forestry workers.”

“For decades and decades, we’ve been logging old growth as fast as we can, and 97 percent of it is gone forever,” she said. “It’s never coming back. So we have less than three percent left, and after sustained pressure, in 2017 (B.C. Premier) Mr. (John) Horgan promised that he would bring in sustainable forestry management. He then went on to log a million acres of old growth.”

She says the Old Growth Review Panel has recommended a moratorium on old growth logging now, “because there is so little of it left and we are really in a biodiversity crisis in British Columbia.”

According to Anderson, the panel asked for the government to put programs in place to help forest workers transition to a sustainable second and third growth industry.

“That means support for community forests and First Nations communities that are transitioning to sustainable second growth and the remaining old growth, there’s so little of it left, and it’s so valuable for tourism, worldwide.”

“There are people who have been standing in the mud and rain for months to protect that,” she said.

During his 2020 election campaign, Horgan said that in early September, the BC NDP “moved to protect nearly 353,000 hectares of old growth forests.”

A full list of locations participating can be found here.